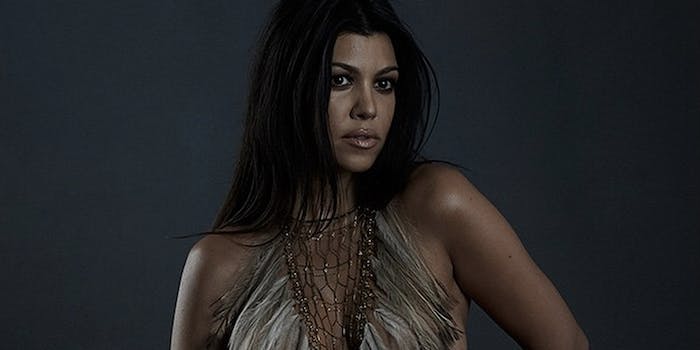 Kourtney Kardashian's Internet power play is upon us.

Kourtney Kardashian is nine-months pregnant and seizing a unique moment in her body’s history by posing semi-nude for Dujour. On Tuesday, the celebrity lifestyle magazine published an interview and photoshoot—and in the wake of her sister Kim‘s firestorm nude shoot, it’s drawing instant parallels and familiar attention.

When asked about posing nude and not pregnant, Kourtney replied with an indirect side-eye at her sister’s recent public developments:

I would never say never, but I don’t think so, no. What appeals to me is celebrating the shape of my body being pregnant and capturing that time in my life. I wanted to do something that felt authentic to me rather than being pushed in a certain direction by somebody else.

When Kourtney was pregnant with her son Mason, she’d apparently posed nude for family photos. She enjoyed the experience so much, she says, that a professional and public extension of that idea organically fell into place.

You can read the whole interview here. Kourtney’s photos are posted in a separate Dujour gallery.