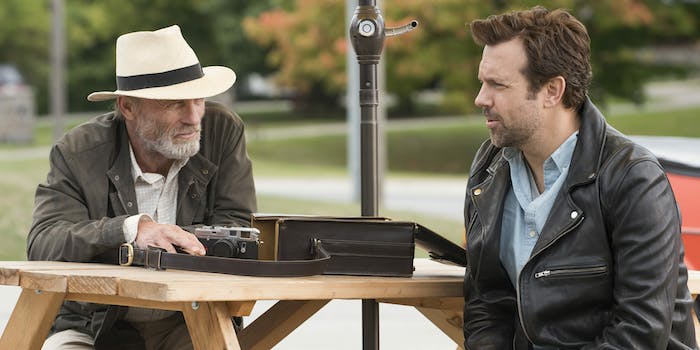 Netflix's story about estranged family will move you.

Netflix’s Kodachrome is like going to your childhood home to play a game of catch in your backyard. It’s comforting and you fall right back into the routine. The well-worn glove still fits after all these years and the rhythm puts you at ease. Throwing and catching the ball is automatic, so you can take in everything else around you. The conversation, the weather, your own thoughts—you can be in the moment and enjoy the small things.

Kodachrome starts as a paint-by-numbers story of an estranged father and son working out their issues during a long road trip. There are plenty of familiar sights along the way. The dad is knocking on death’s door. The son is in just at the right place in life that a sudden road trip can upend everything and provide the things he didn’t know he needs. The small moments accrue and, by the end, give Kodachrome an emotional payoff that satisfies more than you’d expect.

Matt (Jason Sudeikis) gets word that his father Ben (Ed Harris) is dying and wants to use his last days to drive to Kansas to have the decades-old film developed. The era of Kodachrome, like Ben, is down to its last legs, so there are two countdowns running throughout the film. Matt barely acknowledges Ben as his father, and their relationship is marked by Matt’s anger toward Ben. The script, by Jonathan Tropper, doesn’t hold back. At one point Matt tells Ben, “no one will be sad when you die.” Damn. He lets the characters be ugly and Sudeikis and Harris navigate these conversations well. It’s no surprise that Harris handles the material so elegantly, but Sudeikis steals the show. There is a moment where Sudeikis has to change his entire demeanor in an instant, and the way his expression shifts is genuinely heartbreaking.

One of the smartest choices that director Mark Raso makes is to let scenes breathe. The movie comes to life in the silences. Those moments that feel the truest to real life. That lived-in sensation draws you in, even as the characters continue to bicker.

For as much as the movie belongs to Sudeikis and Harris, Elizabeth Olsen holds her own as Ben’s nurse Zoe. On the page, Zoe is a cypher, but Olsen turns her into the glue that holds the movie together for long stretches. She’s a catalyst for the action, but also the referee to Matt and Ben. As we learn more about Zoe, the more it is clear that the story left some of its potential on the sidelines.

However, this is a father-son story, and when the two characters are alone without any buffers in its last half hour it hits its peak. Matt gets to see his dad in a way he never has once the two reach Kansas. Ben is a renowned photographer. Watching Ben be lavished with the praise he didn’t ask for while Matt looks on is the film’s best scene.

Kodachrome goes down as one of the better Netflix releases of 2018. It’s the kind of mid-range drama that colors within the lines but has enough strengths to stand out. Like a good catch session, you’ll be glad you took the time.