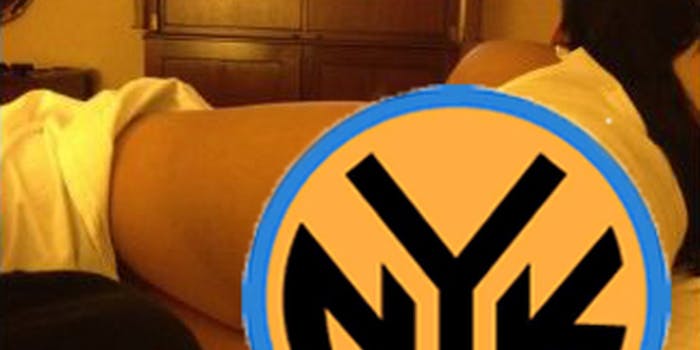 The NBA called a foul on the Knicks guard's photo of a female friend.

Knicks guard J.R. Smith was fined by $25,000 Saturday for tweeting a picture of his girlfriend’s barely-clad rear end.

“I can’t watch the game like this!” Smith tweeted Thursday evening. Along with the tweet, he published a photo. It showed a friend, Tahiry Jose, lying on a bed, watching basketball on TV. She wears a thong, though that’s not immediately apparent.

The NBA tweeted news of the fine in response, calling the picture “inappropriate.”

According to her website, Jose, a former bartender, became famous when she dated rapper Joe Budden. This is not the first time her backside has been broadcast across the Twitterverse, nor does she seem averse to same: Her Twitter avatar is a recent cover of Smooth Magazine (NSFW) featuring her questionably clothed derrière.

Smith has since deleted the tweet and told the Associated Press he “regrets” sending it.

Jose seems to take it in stride. “Imma choke @TheRealJRSmith,” she tweeted.

“He thinks this is the funniest shit ever. so pissed but can’t stop laughing.”