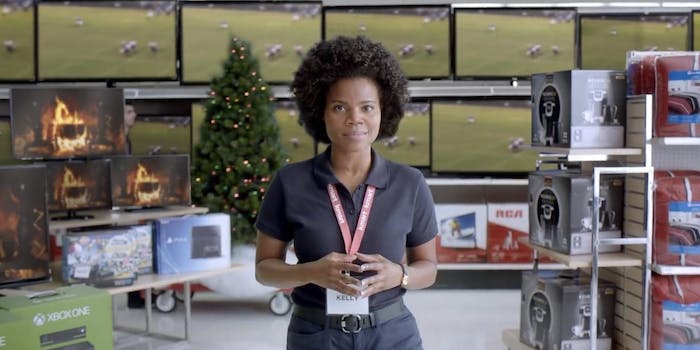 Kmart knows it’s too early for Christmas promo, does it anyway

We spy a decorated pine tree in this not-a-holiday video.

Christmas advertising seems to start earlier and earlier every year, and big-box retailer Kmart wanted to avoid the pitfalls of that slippery slope—while capitalizing on it anyway.

“Hello, America. It’s too early for Christmas,” monologues their spokeswoman in the ad. “So just to be clear, this is not a Christmas commerical.”

The ad goes on to suppose that you had a big event requiring a lot of gifts in December, like “maybe your entire family is having a birthday on the same day,” and suggest that now is the time to start using Kmart’s layaway service to stock up on those gifts. The clip features not-so-subtle yule logs, elves and Santa on a scooter, Christmas trees rolling by in the bakcground, and ends on a giant “Merry Birthday” cake. The not-Christmas message gets across loud and clear.

The ad has already nabbed over 1.3 million views in a few days, proving that even if America doesn’t want to be thinking about Christmas in September, we probably already are.