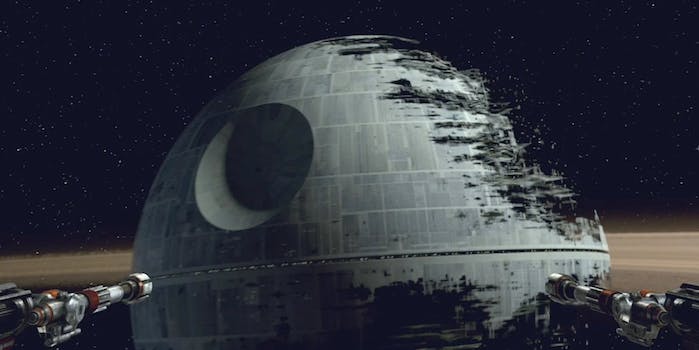 Need something else to sate that Star Wars thirst between almost-daily leaks from Episode VII?

Need something else to sate that Star Wars thirst between almost-daily leaks from Episode VII? Why not dig just a little deeper and uncover some of the source material behind the original trilogy?

Michael Heilemann, interface director at Squarespace, is going through the Star Wars films to trace their inspirations, cultural and historical, and present them side-by-side as one movie-length video mashup. Heilemann’s project will look at the different the cultural mediums which contributed to the Star Wars series, which he considers a “watershed moment” in film, technology, and cultural history. He calls his mashup work “Kitbashed”—a term that describes using a scale model kit to build something other than its intended design—which, of course, Lucas did to build his epic Star Destroyers.

Some of the inspirations Heilemann notes are pretty shocking, including the incredibly famous title and introduction—in which text glides up the screen, introducing the characters and setting—which is very similar to Flash Gordon (1936) and Forbidden Planet (1956).

He says, however, he doesn’t want this to be an exposé of the Star Wars films, but an homage to the “amazing” creativity of the Star Wars team, because it’s a series he admires. “I just love that period of film making, and spending time with it,” Heilemann told the Daily Dot. “Star Wars in particular is such an interesting watershed moment […] For me it became a way to deep dive into film history with a purpose.”

He’s not the first to do so: In 2007, a documentary called Star Wars: The Legacy Revealed detailed some of the parallels between the Star Wars series and history and culture.

Though it’s incomplete, he’s “tired of sitting on it” and has launched his mashup of first film, A New Hope, on Vimeo.

Heilemann told the Daily Dot that, if he gets time, he will attempt the prequel series, but “while I love the idea of doing at least Empire, I doubt I’ll be able to find the time to get it done.” No wonder: Getting this far has taken him four long years, so that dream might just have to stay far, far away.