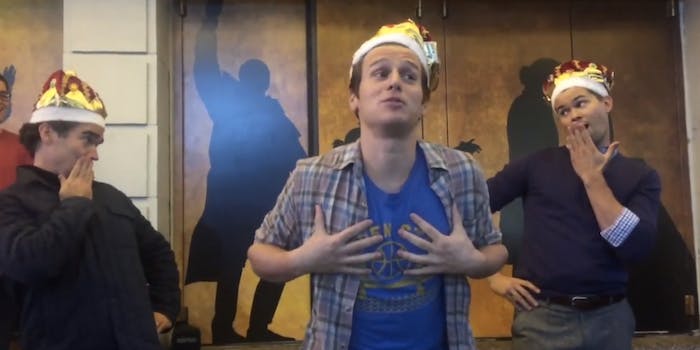 'Hamilton' continues to bend toward the new digital world.

A trio of King Georges singing about equality for all on the streets of New York? It sounds absurd, but it’s the latest eye-catching performance from Ham4Ham, the semi-regular event during Hamilton‘s daily ticket lottery on Broadway.

The three men who’ve all played or will play King George as part of the production so far teamed up for an iconic trio captured by rapt fans waiting to see if they’d won coveted $10 tickets. Clad in crowns and street clothes, they gender-swapped the Schuyler Sisters’ sassy girl power number, with current Schuyler sister Renee Elise Goldsberry stepping in as Aaron Burr.

While a clip has already garnered 37,394 views over the weekend, one fan went as far as to combine all the footage from different angles for a multi-camera clip that captures all the excitement.

Brian D’Arcy James, who originally played the role off Broadway but left to star in last year’s Something Rotten, joined Jonathan Groff, who originated the role on Broadway and is stepping out for a few weeks to work on the Looking film for HBO. He’s being replaced by Broadway vet and fellow HBO star Andrew Rannells. In the clip Groff takes on the Angelica role, with James as Eliza and, naturally, replacement Rannells as “afterthought” Peggy.

In a medium known and prized for being able to churn out identical experiences every night, Hamilton‘s turn at Broadway continues to bend toward the new digital world. Even as Hamilton continues to pick up momentum, sell out more shows, and with its creator winning a McArthur Genius Grant and hosting special fundraising events for the president, the cast and crew still has time to add “Web phenomenon” to its list of achievements.