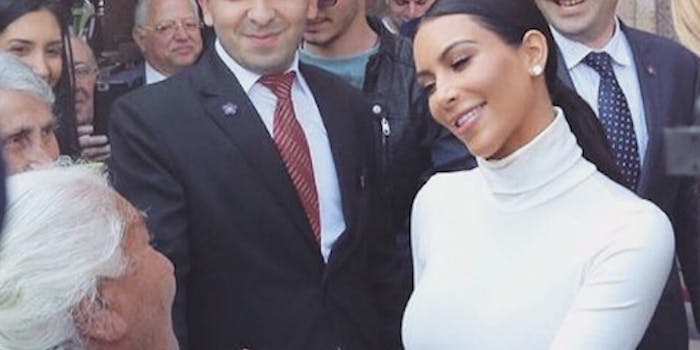 They're 'in heavy talks.'

Kim Kardashian is taking a page from husband Kanye West‘s book and enlisting the help of Ivanka Trump and Jared Kushner in the case of an imprisoned 62-year-old that caught her attention last fall.

Back in October, Kardashian tweeted about the case of a grandmother named Alice Marie Johnson, who has served over 20 years of a life sentence for a first-time, nonviolent drug charge. Johnson, a Black woman from Mississippi, was convicted of “drug conspiracy and money laundering” in 1997, when she was in her early 40s. The single mother of five children (and now grandmother and great-grandmother) was sentenced to life in federal prison without the possibility of parole.

Kardashian first drew attention to the case by sharing a link to a Mic article about Johnson’s case, adding the caption, “This is so unfair…” but Johnson’s situation has remained unchanged. There hasn’t been much new information about the case until this week.

According to TMZ, Kardashian is “in heavy talks” with Trump and Kushner to see what can be done to pardon Johnson and have her released. A source told the tabloid that the trio have been in contact for “several months on Johnson’s freedom” and that Kardashian has gotten her attorney Shawn Holley involved too. Johnson’s file is reportedly now on the president’s desk for review.

Johnson appealed to former president Obama for clemency during his presidency, but was not granted it.

Kardashian is no stranger to advocating for imprisoned women online. Last November, she also tweeted about the case of a sex-trafficking victim named Cyntoia Brown, who was convicted of murdering her abuser and sentenced to 51 years in prison. The case ended up gaining a lot of media attention, with Rihanna joining the conversation about Brown’s sentencing, and Kardashian saying that she had her lawyers looking into what could be done for the young woman.