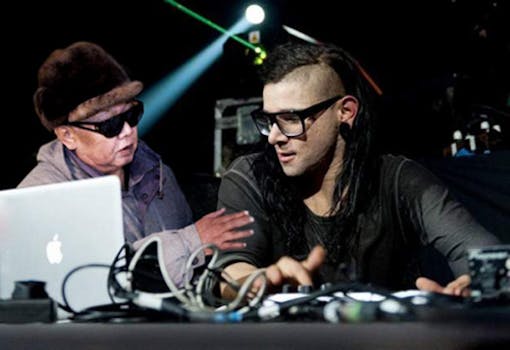 On Tumblr, Kim Jong-Il spins in his grave

The late Fearless Leader is a posthumous buddy act with all the hot DJs.

It’s enough to set a dictator spinning in his grave—spinning mad licks at the DJ booth, that is.

Kim Jong-Il, late Fearless Leader of North Korea, dubstepped off this mortal coil Saturday, but he’s already a meme on Tumblr twice over. That now-hoary classic of the Internet, Kim Jong-Il Looking at Things, is so Monday. Just like Kim Jong-Un in Pyongyang, there’s a new Ultimate Ruler of the Kimblrs: Kim Jong-Il Dropping the Bass.

The famed entertainment junkie (who once held a filmmaker captive for eight years as a sort of showbiz tutor) has found a new career being Photoshopped into picture after picture of DJ action.

Online for two days, it’s already a hit, as the 1,154 notes on this single image can attest. But then, it’s not every day you see a dead dictator deejaying with Daft Punk.