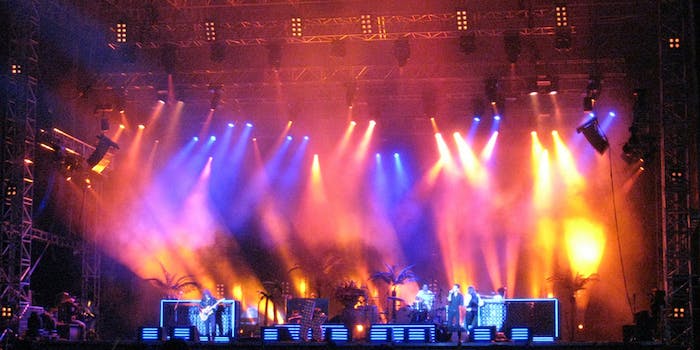 Grantland refuses to believe people actually like the Killers

Editors overturn an unwanted—and arguably uncool—result in the publication's "Best Song of the Millennium" contest.

It’s the finals over at Grantland’s ill-advised “Best Song of the Millennium” voting bracket, but one of the two contenders almost didn’t make it to the championship. That’s because Outkast’s once-ubiquitous “Hey Ya!” appeared to have lost a prior matchup with that staple of crummy frat bars: “Mr. Brightside,” by the Killers.

Indignation on all sides quickly reached a fever pitch. Shortly afterward, however, Grantland editors summarily reversed the result, writing that “our bracket got spammed by Killers fans.” Whether that means Killers fans actually used spam bots to artificially inflate their numbers or were just voting repeatedly in huge numbers as some kind of organized groundswell (and how Grantland staff judged the difference) is unclear.

Though the band has given rise to several active forums and fansites—and boasts nearly 9 million likes on Facebook—no great call to arms among this legion of fans was apparent. Even so, commenters at Grantland suspected a coup, as the editors had been gnashing their teeth over “Mr. Brightside” beating out “Since U Been Gone,” “Paper Planes,” and “Yeah”  in previous rounds.

“From the way they’ve been talking about this song all tournament I was waiting for them to pull something like this,” one reader wrote on Facebook. “I myself wouldn’t be surprised in the slightest if I found out ‘spambots’ were ‘late voters we didn’t want to advance the song.’” Another remarked: “Your hatred for the Killers probably drove a lot of the vote for Mr. Brightside. Hell, I revisited it just because you guys have been so mercilessly hating it.”

In fairness, this bit of bracketology was no doubt doomed from the start, taking as its prime assumption that the best songs of the millenium are the most widely recognized chart-toppers; this then inevitably spilled into a savage war between rockists who disparaged the R&B “machine,” hip-hop aficionados miffed at the track selections, and other assorted poseurs looking to re-contextualize what we listened to in 2003.

The Killers may have benefited from that ideological fracture, too, having quickly become the sole surviving rock band in a rap-heavy region. “Mr. Brightside making it this far was a reflection of how all genres that aren’t hip-hop/rap/Adele were massively slighted in the bracket’s construction,” one person commented, “and so plenty of people who preferred other songs voted for Mr. Brightside because it was basically the only option of its kind left.” I guess going down with the ship is a pretty rock ‘n’ roll move when you think about it.

The adjusted vote stands at more than 31,000 for “Hey Ya!” and half that total for “Mr. Brightside.” But at the end of the day, whether you throw an asterisk on OutKast’s victory or not, there’s really just one lesson to be learned here: Democracy doesn’t work. Let’s shut it down, people.