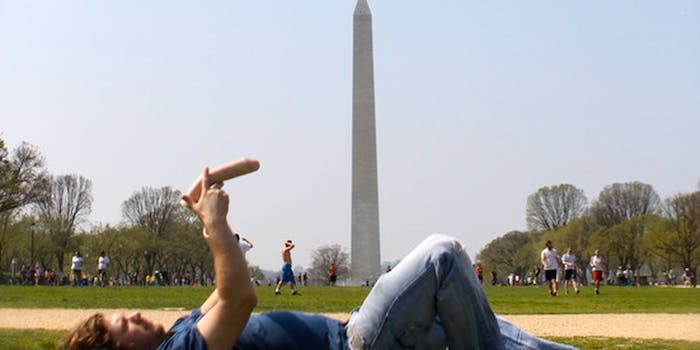 Kickstopper: “Big Like Me,” a documentary film to prove that size does matter

An unfinished Kickstarter documentary follows one man's attempt to enlarge his penis.

“Large penises are more fetishized now than they ever have been before, and guys are watching,” the Los Angeles-based comedian and movie-making hopeful told the Daily Dot. “I have no interest in seeing a guy’s penis myself or touching a penis, but I, like a lot of guys, am drawn to a lot of these sites.

If you ask Bergman’s loving wife, the 32-year-old’s main member is perfectly average. That hasn’t stopped him from launching one of the greatest organ realignment campaigns known to modern man in Big Like Me: One Man’s Quest to Enlarge His Penis, an unfinished documentary and Kickstarter about one man’s quest to come to terms with the size of the heat he’s packing. Bergman set the funding mark to complete Big Like Me at $30,000. Less than a week into the campaign, he’s eclipsed the $1,000 mark.

“It’s a personal journey about my very real obsession with pornography and, in particular, with penis size and how it has affected my life and will continue to affect my life. But there is a broader look at contemporary society’s obsession with size.”

For the past two years, Bergman has traveled around the country to talk with sex symbols (the world’s “largest” man) and sexual novices (a Mennonite girl) about the importance of a man’s girth. He’s shot interviews and revealed his own embarrassments (“Well, you’re just so confident, and all the guys I’ve met that are confident are always well-hung,” one woman told him). He’s met with therapists and even gone on a 30-day hustle to try every single penile enhancement product on the market.

Which, to most people, should be just about 100 percent “average.”