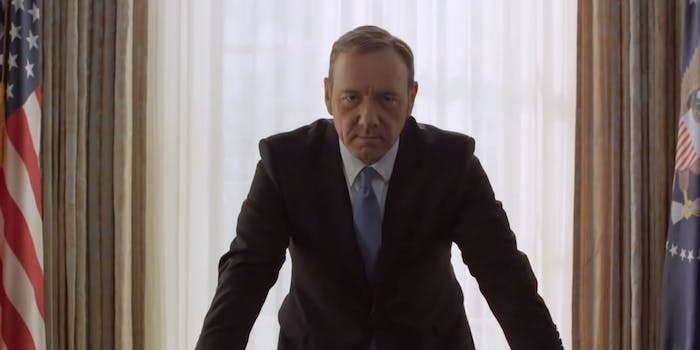 The show's politics aren't the only thing that's off.

House of Cards made its triumphant return to Netflix Friday, bringing with it a third season full of Frank Underwood’s trademark southern drawl. But if you’re a fan with a keen ear, you might not be buying Kevin Spacey’s South Carolina accent, and for good reason. That’s because there’s a lot more that’s off than just the show’s politics.

The folks over at Vox decided to do some deep digging into the dialect of everyone’s favorite corrupt politician and figure out the error in his speech. According to linguists, Spacey’s capitalized on r-dropping in his affectation. Instead of taking the time to pronounce his Rs, he glides over them like a fan boat in the bayou.

But r-dropping mostly died out with the plantation south. So how can Spacey remedy his wonky southern accent for something more legitimate? It’s all about the vowels and how they’re formed in the mouth.

Next time you want to slip into a southern accent, mind your a, e, i, o, and us and you’ll fool even the sharpest of ears.