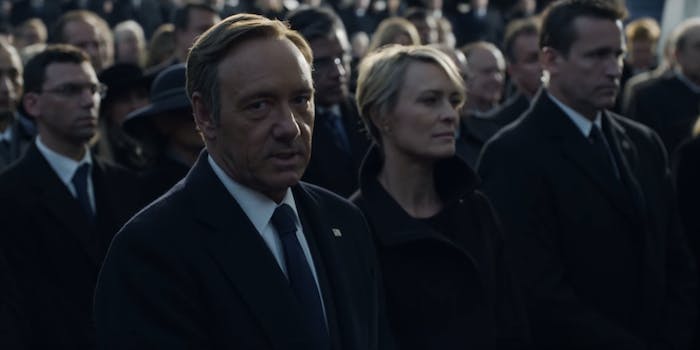 It’s strange when American actors appear in overseas commercials. It’s even stranger when they act in performances not intended to be seen back here in the states. But when an American actor appears as an iconic character in an overseas ad? Well, that’s something that has to be seen to be believed.

Now, in a newly traveled spot for the Chinese e-commerce giant Alibaba, Kevin Spacey appears in the role that put Netflix on the map and won him a Golden Globe: Frank J. Underwood.

“Good evening to the great people of China,” Spacey says from the Oval Office, in character as the scheming politician who last season on “House of Cards” rose to the highest office in the land. “I am the President of the United States, Frank J. Underwood. And tonight, I wanted to take a moment to say hello to all of you out there—and to wish you a happy Singles Day.”

House of Cards is apparently wildly popular in China. The ad promotes “Singles Day,” which is the Chinese equivalent of Black Friday.

“If this Singles Day is the excuse you’ve been waiting for to spoil yourself in a little online shopping, then I must say I’m more than a little jealous,” President Underwood says. “Here at the White House, there are so many firewalls blocking me from shopping online that not even the President will be able to take adavantage of those amazing deals.”

It might be a little strange to imagine a fictional world where our sitting President would tape such a message. It might be even more unlikely to imagine gruff, suffer-no-fools Underwood standing for such a thing. Nevertheless, if you’re wondering what the perfect gift is for the person on your shopping list who enjoys pushing people in front of fast-moving objects, look no further.

“I wonder how cheap I could get a new burner phone,” the scheming politician says. “Because one burner is never enough.”

RELATED: ‘House of Cards’ is much nicer when it’s made by ‘Sesame Street’

Referencing the online retail site Tmall (owned by Alibaba), Underwood urges Chinese shoppers to purchase M&M’s, a replica of his class ring, and even his Presidential desk. “Whenever I go shopping, I have to dress up so I’m not recognized,” Underwood says, referencing the “disguise” he occasionally dons when he’s going to do something like make a Congressman’s murder look like suicide. “All you need is a pair of glasses like these, and a trenchcoat like this one.”

After hoping that the viewer wins a trip to the United States, Underwood puts on a black hat and references the Season 2 standout moment that said goodbye to Kate Mara. “If you’ll excuse me,” he says, “I have a train to catch.”