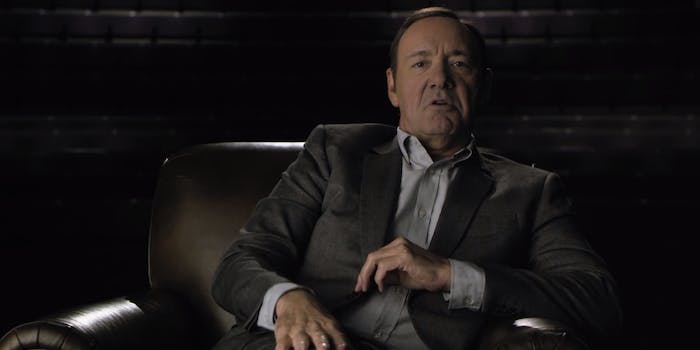 Kevin Spacey acting class will cost you $90, 5 hours, and a little dignity

There is no arguing the fact that Kevin Spacey is one of the greatest actors America has to offer. From Verbal Kint to John Doe to Lester Burnham and Frank Underwood, the man is nothing short of a national treasure, and he has two Oscars on his mantel to prove it. So why, you may be asking, is he infecting your Facebook feed with a sponsored ad?

The House of Cards star is front-and-center for MasterClass, a site that allows celebrities to teach online courses in their chosen professions. But while many people would undoubtedly kill to possess Spacey’s acting chops, one has to ask: Are you really paying to have the legendary star of L.A. Confidential as your personal instructor, or is this some kind of Internet scam?

“Learn Kevin’s methods to stand out in the casting room, perfect a monologue, master impressions and more,” the MasterClass site explains, teasing the Spacey sessions for spring 2016. “The star of The Usual Suspects, American Beauty and House of Cards teaches the practical techniques that have made him a stage and screen legend. Pre-order to secure your place.”

The site says you can secure Spacey’s tutelage for $90, or even “Give as a Gift”—because nothing says “merry Christmas” like being taught how to push Zoe Barnes off a train platform convincingly.

The site, which is littered with pictures of Spacey appearing casual and inviting—look, he’s holding a Starbucks cup and wearing a vest!—seems to imply at every turn that the actor is going to be Skyping with you on a nightly basis, yet stops just short of saying so.

Instead, your $90 fee gets you a 40-page downloadable workbook, access to 29 video “lessons” that last more than five hours in total, and “office hours.” But before you head over to the Old Vic for some one-on-one time with Professor Spacey, you might want to read the fine print: You are expected to upload videos of your acting, which will get feedback from “the class” (i.e., another wannabe-actor sitting at a computer somewhere); Spacey himself will “critique select work.”

Not to sound jaded, but MasterClass evokes thoughts of everything from Marlon Brando’s off-the-wall acting class to Donald Trump’s now-under-investigation Trump University. Coupled with his “Type E” ads and Chinese shopping commercials, one has to wonder why such an excellent actor isn’t devoting all this energy toward… well, acting.

Browsing through the MasterClass back catalog, additional instructors include professors Usher (who “teaches the art of performance”), Serena Williams (“teaches tennis”), Christina Aguilera (“teaches singing”) and possibly one of the only living thespians out there even more accomplished than Spacey: double Oscar winner Dustin Hoffman, similarly teaching an acting class.

If you want a peek at what Spacey’s “lessons” may entail, watch the video on the site. The actor holds court, doing some of his trademark impressions to off-camera people laughing, and goes on to show him emphatically interacting with unnamed students in a theater and telling them “Farther, farther! Keep it up!” When one student waves her hands too emphatically as she speaks, he puts a chair down and makes her sit in it, saying: “Keep in that mode; sit on your f*****g hands!”

Honestly, watching the slickly edited video, it might just make you want to fork over your 90 bucks. So, is it a scam? Let’s just say that the ad fits right alongside all those posts about religion and politics—be careful what you believe.