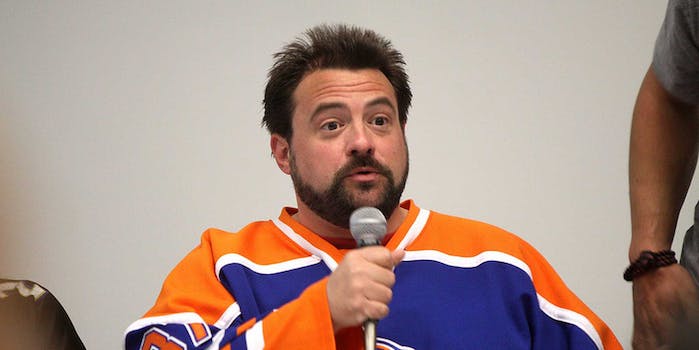 Smith couldn't get the ad for a housemate in a walrus costume out of his head.

Kevin Smith is making a movie based on a viral ad from Gumtree, the U.K. and Australia’s answer to Craigslist. And it’s not a comedy.

The ad first made the rounds online this summer: A single older man seeking a lodger… but only if that lodger was willing to dress as a walrus for up to two hours every day. According to the original ad, this was because he’d bonded with a walrus when living on St. Lawrence Island, Alaska.

“These were perhaps the most intense and fascinating years of my life,” it read, adding that the homeowner had already made a “realistic” walrus costume for future lodgers to wear. “Other duties will involve catching and eating the fish and crabs that I will occasionally throw to you.”

For obvious reasons, applicants would have to pass an audition before moving in.

When he’s not making movies, Smith hosts a podcast called the SModcast. He found himself dedicating an entire episode to the irresistible weirdness of the walrus ad, but halfway through, he began to realise that it might not be such a ridiculous idea at all. Maybe he could make an actual, real-life movie out of this.

Writing on his blog, he explained, “The listing got my creative juices flowing and I began reconstructing the whole thing as an old British Hammer horror film, in which a mad scientist intends to sew some hapless lodger into counterfeit blubber.”

At the time, he’d been waiting to hear back from the Weinstein Company about the fate of a third installment to his famous Clerks series, which has been in pre-production Hell for a while. So he began to work on a walrus script as a distraction, ditching the jokey title he’d used during the podcast:

“By then, I’d stopped calling it The Walrus & the Carpenter. Before I wrote a single word, I knew what a movie about a walrus had to be called. I put the Fleetwood Mac classic Tusk on repeat and went to work.

Tusk is now in pre-production, starring Michael Parks and Justin Long, and has already been compared to The Human Centipede. It’s happening. We’re getting a movie inspired by a Gumtree ad, and it’s not a cheesy online meme cash-in.

All we need now is a movie about the Craigslist superhero nemesis ad—but with real superpowers.