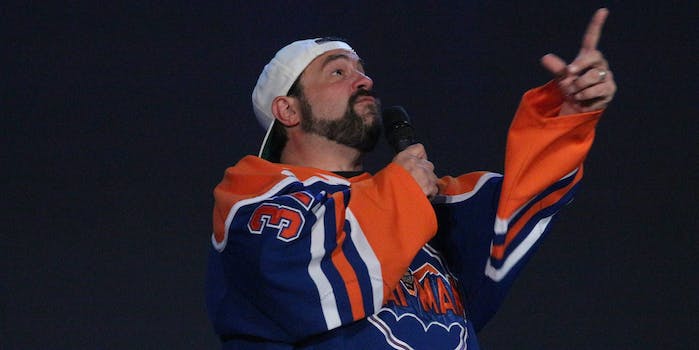 Kevin Smith was just trying to make a gig.

He didn’t expect his trip to Kansas City for Planet Comic Con to turn into such an ordeal. And yet Smith was delayed for hours over an alleged malfunctioning smoke alarm on a Delta airplane.

People of @PlanetComicon! I'm trying to get to you but @Delta has delayed me 3 hours to check a bathroom smoke alarm. Hope I can make it…

Since @delta delayed my flight 4 hours, I now can't get to #KansasCity & @PlanetComicon unless I fly on @SouthwestAir. So fuck you, #Delta.

Smith’s saga took an unexpected turn when he was left with just one option if he wanted to make his lone Planet Comic Con appearance. He could either cancel An Evening With Kevin Smith or take his first flight with Southwest Airlines in five years.The comedian and the airline butted heads in 2010 over Smith being bumped from flying standby. Owing to the fact that two seats were not available, Southwest had made a judgment call to exclude Smith from flying because they believed he would require more space than a single ticket allowed.

For their part, the airline did apologize and refund Smith for the flight. That mea culpa wasn’t exactly met with open arms. Smith hadn’t been on a Southwest flight since. Until now.

It starts. After a delayed flight, I'm on enemy territory, ready to give @SouthwestAir another try… pic.twitter.com/JLyackTk7L

Smith made light of the previous incident, posting a selfie with his seatmates prior to takeoff.

Me & me seat-mates on this crowded-as-fuck flight are ready for departure, @SouthwestAir! So far, no fat complaints! pic.twitter.com/OUax1KDNX9

He was able to make it to Planet Comic Con with nary a moment to spare. Smith had a smooth flight and Southwest was back in good graces with the him.

We did it! Thanks to @SouthwestAir, I'm finally in #KansasCity! Strange bedfellows indeed! Now on to @PlanetComicon! pic.twitter.com/4NRX8S1wW0

We were glad to have you back! Have a great time in Kansas City. ^JT

His quick trip to Kansas City resulted in yet another Southwest flight back home on Saturday. This time, it was by choice.

Flying @SouthwestAir again today. These are my portly seat mates. I'm about to complain they take up too much room. pic.twitter.com/K5eUzjgeNQ

Delta has stayed totally silent throughout Smith’s ordeal. Looks like someone’s got a new favorite airline.