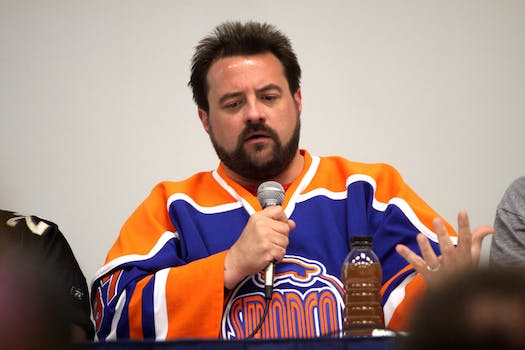 Did you know that the planned Clerks III was nearly funded by Kickstarter?

The revelation about the sequel’s almost-revenue stream was just one of many made by filmmaker, podcaster, and chronic tweeter Kevin Smith in his fifth Reddit AMA (Ask Me Anything).

During the Q&A, Smith discussed not only the much-anticipated conclusion to the Clerks trilogy, but also his podcasting work and other upcoming film projects. Unlike in a few of Smith’s past sessions on the Reddit, co-star and friend Jason Mewes—who plays Jay to Smith’s Silent Bob—didn’t join in.

In addition to answering questions about his work and opinions, Smith also addressed some redditors who took it upon themselves to play a bigger role in his projects. When curlymike asked about appearing as an extra in Clerks III, Smith directed him to his Twitter feed for updates. 15-year-old redditor zero_acidburn asked about securing employment as an intern; Smith directed him to the Twitter feed of Jordan Monsanto, Jason Mewes’ wife.

“Tell her I sent you. You may be able to help us out with our Youtube channel,” he answered in part.

All in all, the thread, titled IAmA Google Glass Explorer Who Is Thinking of Chronicling His Masturbatory Habits. My name is Fat Kev Smith – AMA, mf’s!, received close to 900 comments.

How disheartening is it to read people being shitty to you on Twitter and elsewhere on the internet just because they can? How much do you take to heart? (insipidpiss)

“It’s pretty transparent: folks hate you for doing anything because it reminds them they’re doing nothing. If it helps them forget how fucking dumb they are for not ignoring me and creating something of their own instead, I’m okay with the slings and arrows.

At the very least, it keeps the competition down. Imagine all that wit being put to use to create something new and different rather than simply taking pot-shots at folks who make you feel like a loser? They wouldn’t have to talk about other people’s shit anymore: they’d be talking about their own.

But trolls don’t process that, so they waste their time online. S’cool: I’m compassionate about it because if not for actually doing something instead of bitching about how other people do stuff, I might’ve wound up like one of those living dead fuckers.

It’s a simple formula, haters: the more time you spend worrying about and commenting on me and all the shit I’m doing, the less time you spend doing… well, ANYTHING productive.

If you really hate my ass and what I make and the fact that I get to do whatever I want, then just start COMPETING with me: go try to do better and show people how easy it is and what a loser I am.

Doesn’t take a genius to figure this shit out, kids. But it’s infinitely tougher to see anything real when you’re wearing hater goggles.”

What’s your opinion on Youtube being a platform for success for people who want to start writing sketch comedies and such? (recursion-noisrucer)

“My opinion is HIGH. Figuratively, not literally (people online get shitty about the misuse of literally). I wish Youtube had existed when I was a kid. I’d have made something of myself. Instead, look at this asshole…”

Hey Kevin, I love all of your movies, especially Dogma and Red State. I’m so exited for the new movie as well. How happy were you to hear about Meghan Phelps leaving the Westboro Baptist Church? (joop2323)

I’ve emailed back and forth with her since the break and hopefully, we’ll be sitting down for a SMODCAST soon!”

Hey man, first i love all your work. Heres my question “do you think disney will ruin starwars?” (jxie)

“I think Disney will do STAR WARS justice. Smart to do stand-alone Yoda, Boba and young Han Solo movies. And all the talent they’re attaching are pretty passionate about the subject matter. And if they can take me to a galaxy far, far away anew? They’ll get my money again.”

What do you think so far of Man of Steel? If ever given the chance, would you adapt another Superman movie? Or any other superhero movie? What did you think of Green Hornet? It was the worst movie I saw that year. (chrisjortiz)

“I LOVE the MAN OF STEEL trailer. Zack Snyder can do anything – including fuck my wife. And as much as it’d hurt to watch him do that, he’d make it look so fucking cool, I’d still have to admire him for breaking my heart and destroying my marriage.

And I love the new Superman. I was a huge fan of THE TUDORS. And Michael Shannon as Zod? Take my money, Warner Brothers. Take all my money and make me believe a man can fly…”

Kevin! First of all–huge fan–seen all the movies, watched all the evenings, read your books, Smodcast loyalist etc. etc. I am getting married in one month to the biggest nerd (who I love very much). Advice? (mags1016)

“Marital advice: make with the sex, often and much. Him too. Fuck instead of fighting. Fuck instead of worrying. Just fuck. Lots. It’s the glue of marriage. You love LOTS of people over your lifetime, but when you’re married, presumably, you only fuck one person. Man and woman, man and man, or woman and woman: sex is the crucial ingredient. It’s the secret self you share with the person you choose over all other.

Sounds corny, but it’s actually true. And sexy. So fuck lots in your marriage.”