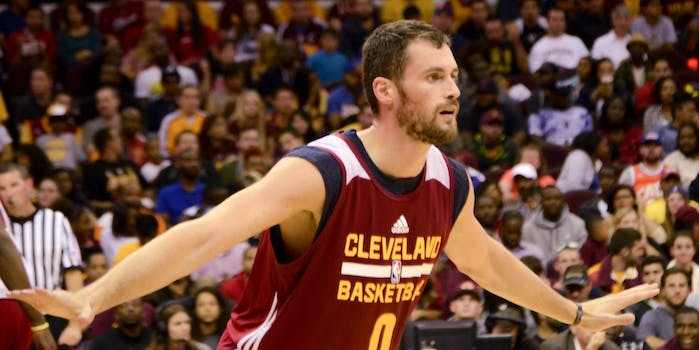 It's worth a try.

Cleveland Cavaliers power forward Kevin Love has been horrendous in the NBA Finals vs. the Golden State Warriors. Not just on the floor, where he’s basically been invisible as the Warriors have taken a 3-2 series lead. But he’s also been disappointingly bad while trying to give a high-five to LeBron James.

Those performances are probably what led an apparent Cavaliers fan to start a GoFundMe page that’s asking people to help donate $10 million to pay for Love’s entire 2016 salary, which then would allow Cleveland to bench Love for game 6 of the series on Thursday.

As the creator of the page, Giles Debenham, wrote, “Kevin Love is playing like a bum and just taking up room on the court. Pay this man to take a seat and let the Cavs win these finals!!”

So far, the page has been a big hit on social media, and it’s been shared more than 850 times. But as of Wednesday evening, seven people had only donated $35.

Even still, fans aren’t happy with Love, and somebody physically showed his or her disgust by destroying a Cavaliers banner with Love’s name on it.

Somebody on Euclid Ave in downtown Cleveland doesn't believe in Kevin anymore pic.twitter.com/40FY49Uxsv

But it all ended well for Love earlier this week when James consented and gave the man the high-five he’d wanted all along.

And somebody else tried to fix the “We believe in Love” banner.

UPDATE: Somebody in Cleveland has Kevin's back pic.twitter.com/Rr1DjqOqVS