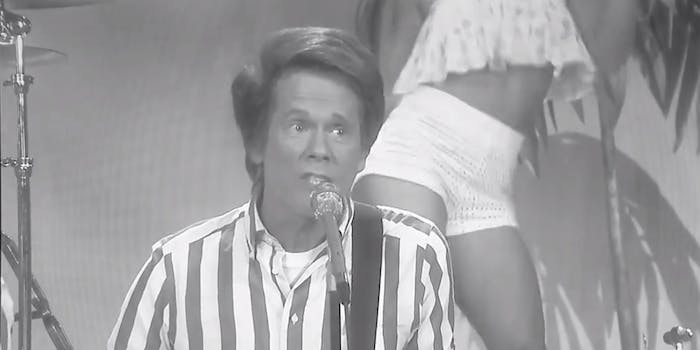 It's probably going to make you hungry.

Kevin Bacon is a man of many talents, but if you’ve spent your life wondering whether or not the seasoned actor could pull off a trademark Beach Boys whine, you can finally check that item off of your bucket list, thanks to his recent appearance on The Tonight Show.

Teaming up with host Jimmy Fallon for a segment called “First Drafts of Rock,” Bacon dons some classic beachwear and an oh-so-retro hairdo to perform a hilarious parody of the Beach Boys’ classic “Fun, Fun, Fun.”

Bacon is a great fit for the brief role, given that he not only knows how to handle a guitar—he and his brother perform as the Bacon Brothers—but he also has the uncanny ability to look like a teenager, no matter how old he gets. I mean, really, would you ever guess that he’s 57?