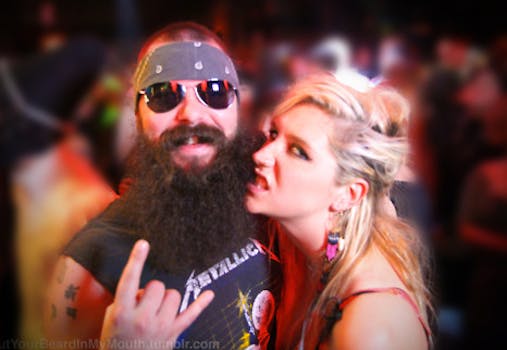 Put your beard in Ke$ha’s mouth

No sooner had the Daily Dot recovered from No Shave November did the "Tik Tok" pop star reveal her gnarly new blog and grizzly fixation.

There are some things in the world that we can’t describe. Ke$ha’s new Tumblr is almost one of them.

Titled PUT YOUR BEARD IN MY MOUTH (all caps, no glitter), the blog’s a series of pictures of Ke$ha chomping hard on guys’ beards. It’s been online since December 6 and shows the singer loving beards as much as she loves Auto-Tuning every song she releases.

That’s it—just seven pictures of Kes$ha eating a beard, a fanboy who wants Ke$ha to eat his beard, and some wizard looking bewildered on how he ended up in this piece of Internet history.

We deployed a crack research team (well, just me) to find out where Ke$ha’s love for beards came from and discovered she does squawk the words “I like your beard” at the end of her song “My Love is Your Drug.”

Apparently, it’s a bit of a fetish. In response to a tweet from Chris Honey (@nascar_junky), Ke$ha (@keshasuxx) asked: “do you have a beardd??”

And, she tweeted that there will be “some more beard love coming soon” (as early as tomorrow!). If you need something to look forward to, this is the best we can give you.