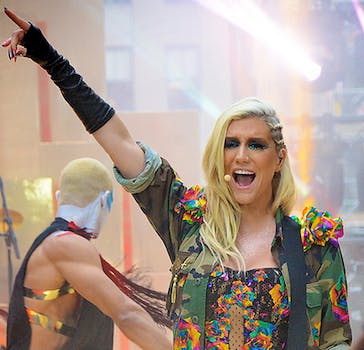 Ke$ha changes her tune: “I was forced” to sing “Die Young”

Though intended to be an anthem for living life to the fullest, the single was pulled from many radio stations' playlists following the school shooting last week.

Pop diva Ke$ha is expressing her grief for those offended by her new single “Die Young,” which has been pulled from numerous radio stations’ playlists in the wake of the Newtown, Conn., school massacre last week.

On Tuesday, Ke$ha said in two tweets that she’s “so so sorry” to those affected by the shooting. Critics are charging that song’s chorus that chants “we’re gonna die young” is inappropriate to be playing after 20 kids died at a Connecticut elementary school.

“i understand. I had my very own issue with die young for this reason. I did NOT want to sing those lyrics and I was FORCED TO,” Ke$ha tweeted, but it was quickly deleted. She didn’t delete her other tweet apologizing to those offended.

“I’m so so so sorry for anyone who has been effected [sic] by this tragedy.and I understand why my song is now inappropriate. words cannot express,” she said.

Ardent Ke$ha fans tweeted their support to singer, saying it’s not her fault about the song’s negative connotation. “how is your song inappropriate? It’s about living life to the fullest, not about dying! :(,” tweeted @marksuxx.

Interestingly, Ke$ha is listed as one of the five writers of the song, along with Fun.’s frontman Nate Ruess. It peaked in the No. 2 slot on Billboard’s Top 100 chart on Dec. 8.

In an interview with Carson Daly when the song released in September, Ke$ha explained the song is meant to be an anthem. “Die Young” is about invoking a youthful attitude about living every day to its fullest.

WDAQ-FM, a pop music station in Danbury, Conn., pulled Ke$ha’s song from their rotation shortly after the shooting. The station transmits to the elementary’s location in Sandy Hook.

“Even though it’s a fun pop/dance record about seizing the moment, all people are going to hear right now is those two words in the title,” said program director Rich Minor to Billboard.