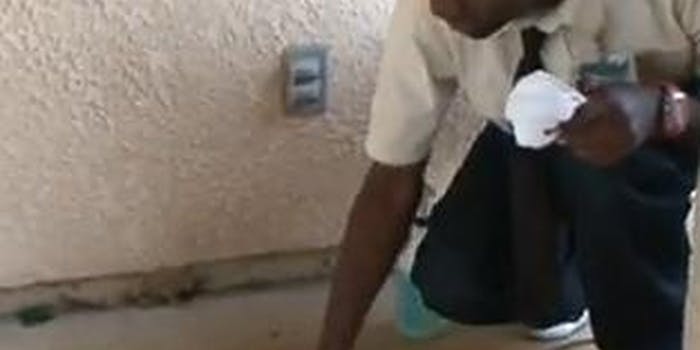 Behold, the Advantage Wonder Cleaner! After a year-and-a-half on YouTube, a traveling salesman's pitch just garnered overnight success on Reddit.

A video of him telling jokes to customers recently hit the front page of the social news site.  What makes this feat unique, however, is that the original video was uploaded on Feb. 16, 2010, and sat at about 9,000 views, until Reddit picked it up two days ago. Now, the video’s been viewed 213,000 times.

In the seven-minute video, Brooks mixes racially charged and self-deprecating jokes with pop culture references as he showcases the power of Advantage Wonder Cleaner.

“No water spots, no finger prints, no streaks. That’s why we can’t sell it to criminals. Don’t tell O.J. or Tiger Woods, okay?” Brooks says as he cleans a window.

Over in the Reddit thread, users demanded that Brooks get a job in the media.

“This has the vibe of one of those youtube videos that puts a man from rags to riches!” commented tatsumakisempukyaku.

Not everyone was charmed, however. Some users discussed the “black guy comedy gimmick” when selling to white people, while others, like CRAZYSCIENTIST, found Brooks sales tactics too pushy and “dominating.” Another redditor linked to blog posts from 2009 about Advantage Wonder Cleaner being a scam.

Advantage Wonder Cleaner’s entry on RipOff Report, a consumer reporting website, went up in 2007, but consumer complaints are peppered with compliments asserting that the product does work. (The original RipOff Report entry dealt with a consumer writing out a check for funds he didn’t possess at the time, which led to bank overcharge fees.)

Over on YouTube,  viewers were more accepting of Brooks, writing mostly positive messages. User Bolaz wrote that he “would hire him﻿ on the spot!”

Various YouTubers also uploaded copies of the original video, perhaps in an attempt to mooch views, and on Facebook, someone created a Kenny Brooks page that has collected more than 300 Likes since Saturday.

Will the Internet propel Brooks to fame? Or is he just another weekend fascination of the digital hive-mind, to be forgotten by next week?

Either way, his quick online ascent is a fascinating demonstration of the power of Reddit.