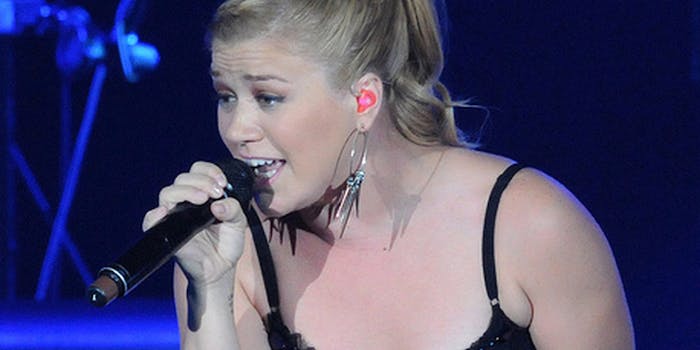 The former American Idol winner lashed out on her Whosay account against claims Davis makes in his new book, The Soundtrack of My Life.

Kelly Clarkson doesn’t think legendary music executive Clive Davis is a “Mr. Know It All” as he claims in his newly released biography.

The former American Idol winner and world’s preeminent pop singer lashed out on her Whosay account against claims Davis makes in his new book, The Soundtrack of My Life, which made headlines Tuesday after Davis came out as bisexual.

In her 500-word letter, Clarkson clarifies that she never cried in Davis’ office, refutes his criticism that her 2007 album My December was a dud, and gave her fans insider insight on how the record industry works.

Beginning the letter “Hey y’all,” because she’s still the same ol’ girl from Texas, Clarkson said Davis was “spreading false information” about her and her music. Cue outrage!

“I refuse to be bullied and I just have to clear up his memory lapses and misinformation for myself and for my fans,” she writes in a clear jab aimed at Davis. “Growing up is awesome because you learn you don’t have to cower to anyone—even Clive Davis.”

Here’s are a few notable excerpts.

On her “hysterical sobbing”:

Not true at all. His stories and songs are mixed up. I did want more guitars added to the original demo (of “Since U Been Gone”) and Clive did not. Max, Luke and I still fought for the bigger sound and we prevailed and I couldn’t be more proud of the life of that song. I resent him dampening that song in any way.

On his ravaging of “Because of You”:

I cried because he hated it and told me verbatim that I was a “sh*tty writer who should be grateful for the gifts that he bestows upon me.” He continued on about how the song didn’t rhyme and how I should just shut up and sing. This was devastating coming from a man who I, as a young girl, considered a musical hero and was so honored to work with.

I am very proud of that and I have my fans to thank. But, again, what’s most interesting about his story is what he leaves out: He doesn’t mention how he stood up in front of his company at a convention and belittled me and my music and completely sabotaged the entire project. It never had a chance to reach it’s full potential. My December was an album I needed to make for myself for many reasons and the fact that I was so completely disregarded and disrespected was so disheartening, there really aren’t words to explain….

She wrote one final parting shot, ending it “I love my label and all of my professional relationships….now. And I am grateful for Clive for teaching me to know the difference.”

Photo via The Cosmopolitan of Las Vegas/Flickr