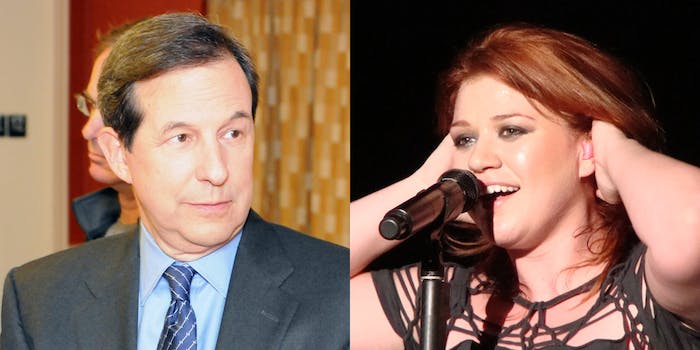 Let this be the last time such an apology is necessary.

Wallace inexplicably brought up Clarkson’s weight during an appearance on Mike Gallagher’s radio show last week, saying, “Kelly Clarkson’s got a lovely voice. She could stay off the deep dish pizza for a little while.”

This was in response to Gallagher saying, “Holy cow, did she blow up.”

Both men received considerable backlash for their comments, with fans saying that the conversation was unnecessary and judgmental and that the men should have focused on Clarkson’s work and voice instead of her weight.

Y'all really fat shaming Kelly Clarkson after she just had a baby? #idol

After a weekend of backlash, Chris Wallace reached out to Us Weekly with an apology.

“I sincerely apologize to Kelly Clarkson for my offensive comment,” he said. “I admire her remarkable talent and that should have been the focus of any discussion about her.”

Gallagher wrote on his website, “I couldn’t possibly feel any worse than I do for making an observation that led to the conclusion that I ‘fat-shamed’ this talented and classy entertainer. It was a really stupid thing for me to do.”

He also wrote that he was “the last person in the world who should bring up anyone’s weight,” a reference to him poking fun at his own weight on the same radio show.

It sounds like both hosts feel bad about what they said (or at least, feel back about the overwhelmingly negative reaction they inspired), but this whole situation is still proof of the double standard for male and female celebrities. After more than a decade in the public eye, Kelly Clarkson still has to deal with people who feel the need to judge her based on her appearance rather than her career.