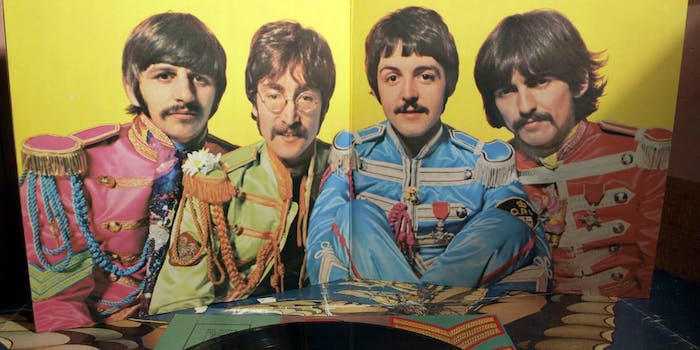 Keith Richards says ‘Sgt. Pepper’ is ‘rubbish’—does he have a point?

Running back the perennially hailed classic for chinks in the armor.

You’re either a Beatles fan or a Rolling Stones fan, and it makes sense that Keith Richards isn’t a Beatles guy. Richards, the Rolling Stones guitarist, poked fun at Paul McCartney on Saturday Night Live in February. During a recent interview with Esquire he ratcheted up the criticism, calling the Sgt. Pepper’s Lonely Hearts Club Band album a “mishmash of rubbish.”

Despite the fantastic phrasing, Richards is entirely incorrect. Because Sgt. Pepper’s is incredible.

After all, it’s Rolling Stone‘s No. 1 album of all time—the magazine also called Sgt. Pepper “the most important rock & roll album ever made” and “the pinnacle of the Beatles’ eight years as recording artists”—and as my Daily Dot colleague Aaron Sankin asked, “If that album’s is so bad, how come the Rolling Stones spent a whole record ripping it off super hard?”

Here’s what Richards had to say in that Esquire interview: “The Beatles sounded great when they were the Beatles. But there’s not a lot of roots in that music. I think they got carried away. Why not? If you’re the Beatles in the ’60s, you just get carried away—you forget what it is you wanted to do. You’re starting to do Sgt. Pepper. Some people think it’s a genius album, but I think it’s a mishmash of rubbish, kind of like [the Rolling Stones’] Satanic Majesties—’Oh, if you can make a load of shit, so can we.'”

Let’s make it clear that we have no idea if Richards was kidding when he said Sgt. Pepper’s sucks. As the A.V. Club wrote:

It’s hard to take Richards too seriously here, as he immediately turns on his own band, as well. He compares The Beatles’ ‘mishmash of rubbish’ with the album the Stones put out just six months later (Their Satanic Majesties Request), saying it was ‘kind of like Satanic Majesties…

Me, I’ve always been Team Beatles. I don’t own a single Rolling Stones album, so I’ll firmly reside in the corner opposite Richards. Unless…

Well, what if Richards, joking or not, is right? My father steered me in this direction when I was a kid and taught to me the importance of the Beatles. I’ve never wavered from that, even as my musical tastes have grown harder and faster. But maybe Sgt. Pepper’s really is an overrated piece of mid-1960s art-rock balderdash.

I needed to find out for sure. So, I dove headlong back into the album to see if Richards has a point, making a trip to see the Hearts Club Band play once more and to reminisce about how many holes it takes to fill the Albert Hall. Because, from what I understand, this album is guaranteed to raise a smile.

I always thought this song was slightly weird—perhaps because it was the beginning of a concept album that never really existed—but it’s actually a mishmash (thanks for that phrasing, Keith) of rocking guitar, a French horn solo, fake audience interaction, and some nice vocal harmonizing. I don’t love it as an album opener—maybe because it promises something we never really get—but the song itself is solid.

2) “With a Little Help From My Friends”

Props to Ringo Starr, who was always the most underrated (and certainly the goofiest) member of the quartet, for singing such a pretty song. Apparently, this was one of the last songs John Lennon and McCartney wrote together, and it’s one of their best. I love Joe Cocker‘s cover of this song, but Ringo’s version is pretty awesome too.

3) “Lucy In the Sky With Diamonds”

You certainly don’t need to drop acid in order to appreciate this classic.

Major points off for any songwriter who rhymes the word “school” and “cool,” which is done in the very first two lines. Plus, the grammar in this song is awful: “Me used to be angry young man, me hiding me head in the sand.” Maybe less cool and more school, Paul. Personally, I’m not a fan of the band’s experiments with Indian music, and the tamboura first rears its head here.

Is this song about heroin or about roof repairs? Maybe both, maybe neither. But this song is so dreamy with ethereal drums by Starr and wonderful vocals by McCartney. It also takes harpsichords to soaring new heights.

I didn’t really understand the power of this song until after I had kids. Much like “Sunrise, Sunset,” this song makes me sad for my future when my children will leave me for the outside world and the rest of their lives (although not necessarily in the specific way written out in this song). It’s beautiful, especially the Greek chorus, and listening to this today left me with tears.

God, this song is so stupid. But it’s wonderful and funny, and the calliope breakdown after Lennon sings, “And of course Henry the horse dances the waltz” still kills me, as does the organ solo near the end. Maybe it’s a rubbish version of some sort of arty prog rock, but it’s my guilty pleasure rubbish.

8) “Within You Without You”

Oh, this has tamboura in it, huh? Skip.

McCartney and Starr are now about a decade past 64, and I wonder how they relate to this song these days. Amazingly, McCartney apparently first had the idea for this tune when he was 15. Unlike “She’s Leaving Home,” this song actually makes me look forward (relatively speaking, of course) to being an old man. Maybe it’s the clarinets. Lennon, though, apparently hated it. As noted by BuzzFeed, “John snidely referred to this one as ‘granny music.’ When asked about the authorship of the song, he said it was ‘Paul’s, completely. I would never dream of writing a song like that.'”

Lennon apparently disliked this song also, but it’s a cute, harmless ditty that has a wonderful little piano soul, and some really cool breathe sounds at the end. In fact everything that happens in the background is what really makes this song a killer. I actually liked this song while re-listening to it today even more than I remembered enjoying it before.

Lennon labeled this song a “piece of garbage” and while that’s a bit harsh, especially coming from the guy who wrote it, I wouldn’t miss this tune if I never heard it again (though I still managed to enjoy McCartney’s guitar solo). It’s on songs like these that Richards begins to make the tiniest bit of sense.

I’m a big fan of goodbye songs that effectively bookend the album’s welcoming song, and in this case, I actually like the reprise better than the album’s opening track (I think because I enjoy the phrasing when the band sings, “It’s Sgt. Pepper’s one and only Lonely Hearts Club Band”). And it dovetails so nicely into the best song on the album—maybe the best song by this or any other band.

This song is a gargantuan achievement that’s difficult to sum up. So I’ll let David Crosby do it: “I was, as near as I know, the first human being besides them and George Martin and the engineers to hear ‘A Day In The Life.’ I was high as a kite—so high I was hunting geese with a rake. They sat me down [in the studio]; they had huge speakers like coffins with wheels on that they rolled up on either side of the stool. By the time it got the end of that piano chord, man, my brains were on the floor.”

Richards must have been joking in this interview, right? After listening again to all these songs multiple times, I like the album now even more than I did before. I’m a Beatles guy, and ‘ll always be a Beatles guy. And, I think in the deepest part of his heart, Keith Richards is a Beatles guy as well.