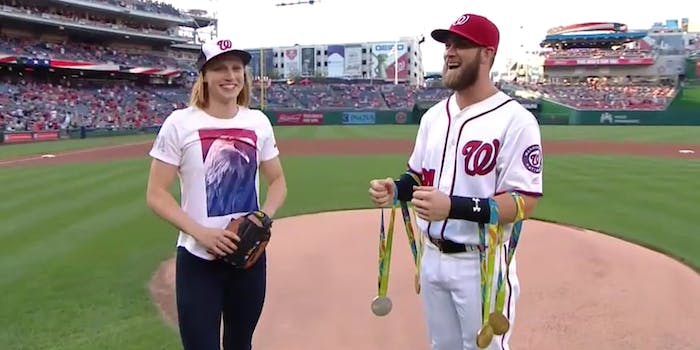 Washington Nationals right fielder Bryce Harper already has plenty of accomplishments in his professional baseball career, but his biggest accolade to date just might be becoming a medal holder to an Olympic champion.

U.S. swimmer Katie Ledecky, professional badass and winner of five medals (four of them gold) at the Rio Olympics, attended the Nationals game Wednesday night to throw out the ceremonial first pitch. She had her medals on hand but they weren’t very practical to wear while she tossed a baseball, so she gave them to Harper on the mound.

Having learned how to display her medals by none other than Michael Phelps, she took them off one by one and handed them to Harper, who hung them on his arms—yes, both of them. It was a process that took nearly 30 seconds before Ledecky threw out a strike, and Harper was a great sport about the whole thing.

Ledecky proposed the idea of displaying her medals on a player’s arm to the Nationals and explained that Harper “offered to—he wanted to be the one that held them.”

When you have too many Olympic medals so you have to ask the MVP to hold them while you throw out the first pitch. pic.twitter.com/m6w8l02m5n

Most Valuable Medal-Holder. Thanks @bharper3407 and @nationals for a great night!

The Nationals ended up losing to the Baltimore Orioles, making Ledecky’s medals his only brush with victory that night. With the Nationals leading its division and baseball returning to the Olympics in 2020, he’s got plenty of opportunity to medal up.