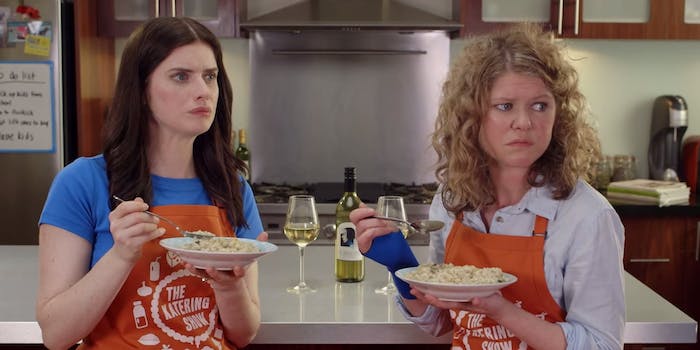 Meet the Kates of 'The Katering Show.'

What a tease cooking shows are. Like some sort of culinary lap dance they know just how to show you all the right bits to get your juices flowing and then… you mean I don’t get to eat that??

It’s infuriating stuff but just like strippers there’s no denying their popularity; from cookie-cutter cable fare that all seems to feature Ted from Queer Eye to “titillating” Korean videos of people eating (and laughing) that apparently—don’t ask me how—make their temptresses money.

But if we don’t get to eat, we might as well laugh, right? And so we have The Katering Show to rescue us from our unfulfilled urges and the rage that rapidly forms when, as if to rub our faces in it, the camera and sound people are invited up from behind their equipment to chow down on the finished product.

The creation of Australian comedians Kate McCartney and Kate McLennan—who previously worked together on the bound-for-TV Bleak: The Webseries—The Katering Show is the kind of thing that would be lauded for its genre-skewering swagger if we weren’t all distracted by its hilarity. It’s a brilliant series, one that breathes within its own little world replete with recipes, sight gags, a consistently amusing Facebook page, and two fully formed-yet-heterogeneous characters that are both so engaging that you increasingly pine for more backstory.

So with six episodes now released to the world we ran some questions by the two Kates—McLennan the epicurean domestic goddess, and McCartney her diversely food-intolerant friend—to get their thoughts on food culture, food television, food language, and food.

Is it odd that cooking shows are so popular when you can’t even taste the food?

Kate McCartney: I don’t watch cooking shows. I’m interested in the filmmaking craft so I watch real cinema, Tom; like the trailer for Blue Velvet, and the bloopers from Battleship Potemkin, and Dogme-inspired 10-minute YouTube videos of Malaysian toddlers singing “Halo” by Beyoncé at 2am after I’ve had some “lonely wine.”

In a few short years quinoa has gone from unknown to trendy to mainstream to “ethically compromised” due to its soaring prices in the places it is grown and now, perhaps, just regarded with some sort of apathy. Where do you stand on the grain?

McL: I’m not into quinoa. If I want to bulk up my salads I just add in a tablespoon of Metamucil; you get the same filling effect minus the annoying aftertaste of white guilt.

McC: I tried to eat quinoa for a week, because according to some rat-haired grain shaman I was consulting at the time, it’s food-intolerant friendly. Not only did it taste like a mouth apocalypse but it reacted so badly with my guts that I lost 25 kgs, and I had to change my legal status to “The Undead.” To this day cats still attack me and I can make the water in toilets go the other way.

I remember a young Hugh Jackman (who had just been cast as Gaston in the Melbourne production of Beauty and the Beast) appearing on What’s Cooking with Geoff Jansz. I think he cooked tempura. Do you have any favorite TV chefs or memories from cooking shows?

McL: My favorite cooking show was The Cook and The Chef because there was clearly a lot of heat and sexual tension flying around in that kitchen. I’d give anything to be a slice of Berkshire Pork in a Maggie Beer and Simon Bryant sandwich.

What’s the next foodie trend?

McL: I am like a big, broad, money-grabbing church; I’ll accept and eat foods of all different shapes, colors, and stages of existence. However I cannot abide people who don’t like coriander. I’d never eat someone who didn’t like coriander.

McC: It’s probably easier and quicker if I go through a list of things I can abide in this world: stretch fabric, vanilla-scented bin liners, and local news footage of the first hot day of summer at a zoo, during which animals are given fruit frozen inside buckets of water. I want that playing on a loop at my wedding.

Do you have any favorite words for describing food? Rick Stein, for example, uses the word “unctuous” about three times each episode.

McL: I like to use the word “moist” as often as possible. And not just when describing food.

McC: “Non-corrrosive” and “free” are probably my favorites.

What do you think of this food-powder-thing, Soylent, meant to cover all human nutritional requirements?

McL: I’d rather drown myself in a bath of Soylent than ever have to drink it.

McC: It seems like a pretty sad, anti-social way to meet all your nutritional requirements—via a viscous food drink that doesn’t even contain human feet.

I recently went to dinner at a friend’s house and they had made the sauce for the scallops into spheres by using some sort of chemical. They also own a sous-vide. How do you feel about these sort of things encroaching on the domestic kitchen?

McL: That was a private dinner party amongst friends, Tom. There’s no need to get all snarky about it. Besides, I’m pretty sure you enjoyed my sodium alginate and calcium chloride spheres at the time. Then again, maybe I failed to notice your displeasure as I was a little distracted by my respiratory system, which was failing because I’d consumed the cheap red wine that you’d brought along as an accompaniment. (Seriously Tom, who brings Shiraz from Aldi to a “Mysterious Molecular Molluscs” dinner party? It’s SEAFOOD TOM! What the fuck were you thinking? I don’t even know who you are any more).

McC: Tom, I had to look up most of what you just said, including “scallops into spheres,” “sous-vide,” and “friends.”

I’m cool with all of that. The more time those people spend in a kitchen, the more time they spend out of our public spaces and in front of an oven gas leak that I’ve secretly engineered.