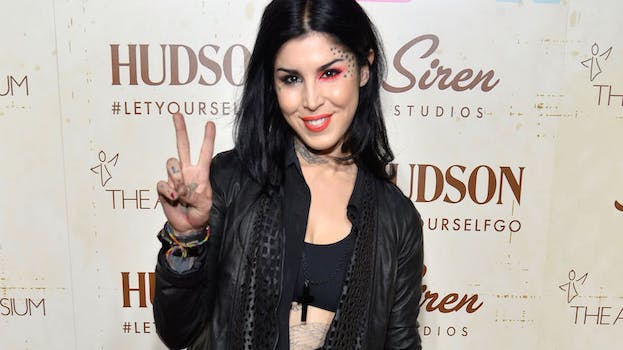 Kat Von D is receiving some backlash for one specific lipstick shade in her Sephora makeup line. The bold stain is called “Underage Red,” and many people were turned off by the connotations that came with the name.

#Sephora should be ashamed. So should @thekatvond #UnderAgeRed should never have been a thing https://t.co/fzyuNE5Reo

@Sephora and Kat Von D need better marketing and a prayer. Who pitched #underagered as a lipstick color??

In light of the backlash, Von D took to her Facebook page to write a lengthy essay explaining why she chose the color’s name.

“I clearly remember wearing a variation of this shade when I was 16 years old. I also remember the feeling of wanting so badly to go see a specific concert at this age, and not being able to get in to the venue because I was underage,” she writes. “‘Underage Red’ is not a girly, pink shade. It is not a sophisticated, deep red either. It is an unapologetic, bold red. To me, ‘Underage Red’ is feminine rebellion.”

The “LA Ink” star also makes it clear that the lip color isn’t going anywhere—in fact, it’s sold out, but will be restocked soon. She is sticking by her makeup line and writes that “I refuse to sacrifice my integrity and creative freedom. NO. I will not be pulling ‘Underage Red’ from my collection. And NO. This is not an apology.”

“I am fully aware of my overly expressive, poetic, and sentimental tendencies at times – especially when it comes to naming shades and collections in my makeup line. But for that, I will never apologize,” Von D says. “Most names, whether inspired by my favourite bands, lyrics, personal muses and memories, are very close and dear to my heart.”

For all the people who are criticizing Von D for—as she summarizes—promoting “the degradation of women, statutory rape, sexual behavior, human trafficking, underage drinking, or even idealization of fleeting youth,” the makeup artist has a number of supporters as well.