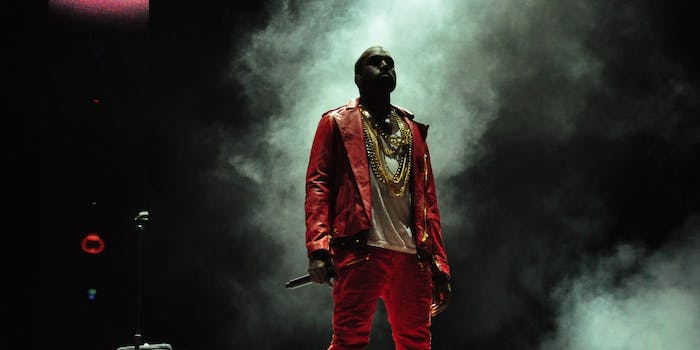 Debuted during his Adidas fashion show in Manhattan.

Kanye West debuted “Wolves” Thursday during his Adidas fashion show. It’s almost surely the first track from West’s new album if the Adidas livestream or his label’s aggressive work in taking down YouTube bootlegs is any indication.

The track features an assist from pop provocateur Sia, Chicago rapper Vic Mensa, and production from Cashmere Cat and Sinjin Hawke. West’s enduring ear for cobbling mini-lineups of interesting contemporaries may be the most impressive thing here.

“Wolves” is out there now, listened to and processed by thousands, so we might as well talk about it. It’s minimalist and aims for a feral, dialed in mood—like when you walk outside after last call in a coat and your breath is visible. There’s unearthly, sparse percussion, and West singing in Auto-Tuned yelps about condescending romance. There are arresting wolf samples, and the orchestration provides a top-notch framework.

“If you’re mama knew how you turned out, you’re too wild,” he sings early and often. But West can’t resist, singing “I need you know… you’re much too good to be true.”

The muse isn’t the wolf, however, West is the wolf let’s be clear: “Don’t fly so high your wings might melt, I’m just bad for you.” He is an empathetic emperor baring his soul to a shell. The Weeknd’s “Often” is just as grossly sensual, but it’s a better track.

The move is a nice gesture following a throwback rant at the useless Grammys this week. He attacked an artist’s creative merits, then put money to mouth with an intricate place-setting (the runway, $350 shoes that’ll eventually go for $9,500 a pair on eBay, livestreams, 50 live theater broadcasts). “Wolves” whets whistles for the whole record, while being moving and cool. Go ahead and beam it into our iTunes, Yeezus.

Photo via rodrigoferrari/Flickr (CC BY 2.0)