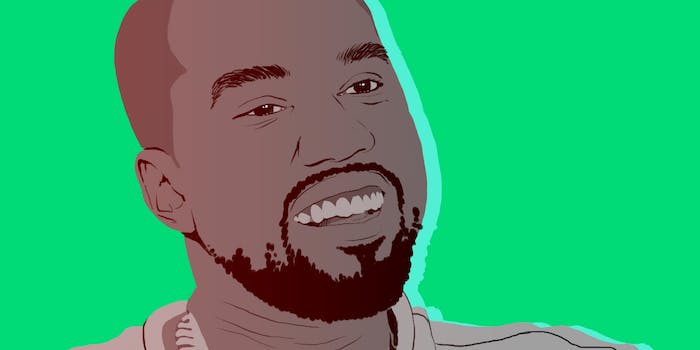 It was an awkwardly long process, but Kanye West is ready for you to listen to new music.

On Friday, West released one full song, “Real Friends,” and a snippet of another duet with Kendrick Lamar, “No More Parties in L.A.” via his website, Twitter, and SoundCloud. The track would be deleted three times on Friday, however, and his SoundCloud page appeared to instantly go dark upon its upload. It’s finally back.

But more exciting is that the enigmatic West may be using Fridays as a recurring occasion for new, freely accessible songs—at least that’s what Kim Kardashian hinted at this week.

In 2010, West spent Fridays from August to December offering up new material leading up to the release of My Beautiful Dark Twisted Fantasy, a mushroom cloud of a rap album with hoverboard technology and cinematic pacing. Even better: Yesterday’s music is profound and captivating—for now quelling speculation that his upcoming album, reportedly titled Swish, is secretly terrible.

Last week, West rang in 2016 by making dad jokes and venting about failed business ventures with Nike. The resulting song, “Facts,” was a comprehensive clunker. Here West is examined and sharp—self-loathing about family obligations.

“I’m a deadbeat cousin,” West raps, before admitting he’s no good at birthdays and forced interaction: “Maybe 15 minutes. Took some pictures with your sister. Merry Christmas.”

Unhinged lothario Ty Dolla Sign blurs lines and sings big, while production credits go to West, Frank Dukes, Boi-1da, and Havo for the understated but thick, rattling instrumental. At the end, West says a cousin extorted him for his laptop and he coughed up $250,000 for it.

The Lamar teaser doesn’t reveal his guest verse, and only plays scattered West raps over a Madlib-produced, warm-soup soul sample. It’s telling nonetheless. Despite the Paul McCartney sessions, bombast of last year’s “All Day,” and winter-storm paranoia of fashion line-adorning “Wolves,” it sounds like West abandoned those sonic tunnels and is instead preparing a quiet, groove-laden LP that stays out of the way of his cranky raps. Or maybe he’ll discard these in a few weeks, but at least his output is forming some kind of cogent through line in terms of what type of music he’s hoping to bundle.