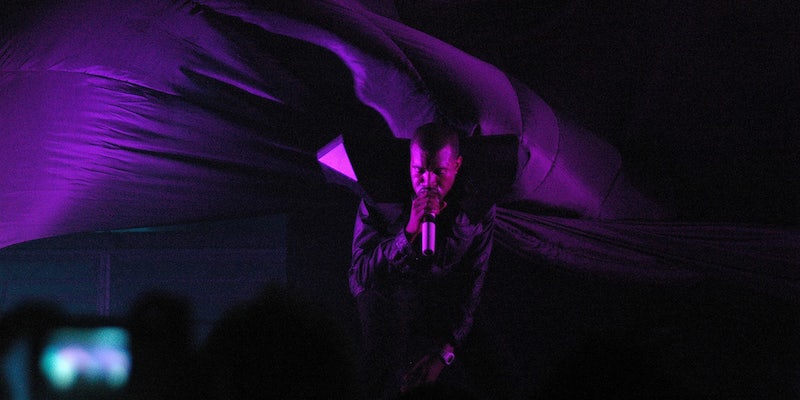 No, Kanye West did not call himself the ‘next Nelson Mandela’

This fake newspaper did.

If the Daily Currant is to be believed, Kanye West has already chosen Nelson Mandela’s spiritual replacement: himself.

Relax. West may have a notorious ego, but he hasn’t actually outclassed himself by declaring that “he will soon be a bigger cultural and civil rights icon than Nelson Mandela” during an interview with WGCI radio in Chicago.

The Daily Currant is a satirical news site, like the Onion but without humor. Headlines include “Message From God Found Hidden Inside DNA Sequence” and something about Rick Santorum “Producing Straight Remake of ‘Brokeback Mountain.’” Still, the joke seems to be lost on many readers. Maybe because nothing Kanye says is really that shocking nowadays.

From the parody article:

“I’m only 36 years old, and when I look at everything I’ve accomplished, it’s the only comparison that makes any sense. By the time I’m 95, I’m going to be a bigger hero than he ever was.

“Nelson Mandela did a lot of good work, don’t get me wrong. But I think I’m on track to do something even bigger. I liberate minds with my music. That’s more important than liberating a few people from apartheid or whatever.

“Not to say Mandela wasn’t for real. I have mad respect. I just think we need to keep things in perspective here. Anyone can be replaced. And I think I’m well on my way towards being the next great black leader. I’m already worshiped around the world. And there’s more to come.”

If all this sounds like it could come straight from a regular news report—at least until you actually read what Kanye is alleged to have said—that’s part of the problem.

The Daily Currant, which describes itself as “the global satirical newspaper of record,” has a style that’s less tongue-in-cheek as it is straightforwardly deadpan, which confuses readers so much it’s practically got its own Snopes debunking category. It’s been roundly criticized for failing to achieve a cohesive satirical tone that doesn’t just take potshots at pop culture—often coming off as more ableist, homophobic, and racist in tone than the things it’s attempting to skewer.

It’s incredibly easy to misconstrue this type of story for the truth, and unlike similar oft-confused sites like Landover Baptist, there’s no larger satirical theme to tip off confused readers that they’re reading works of parody.

So while many readers pointed out that the article was clearly satirical, plenty of others lined up to attack the artist for his alleged comments.

Anyone seen @kanyewest ‘s interview on Nelson Mandela…I’ll kick that disrespectful punk in the teeth!!! pic.twitter.com/ZmPkYYDAzb

Given that Kanye’s latest album features a guest spot from “God,” it’s understandable that people might fall for the gimmick, at least at a glance.

But even if Jamie Foxx thinks Kanye and Jay Z are comparable to Martin Luther King Jr., we can’t see Yeezy declaring a national holiday for himself just yet.

Update: It looks like Kanye’s seen the article. And even he feels the need to set the record straight.

I’d like to address the false stories and noise that have been engineered by the media.