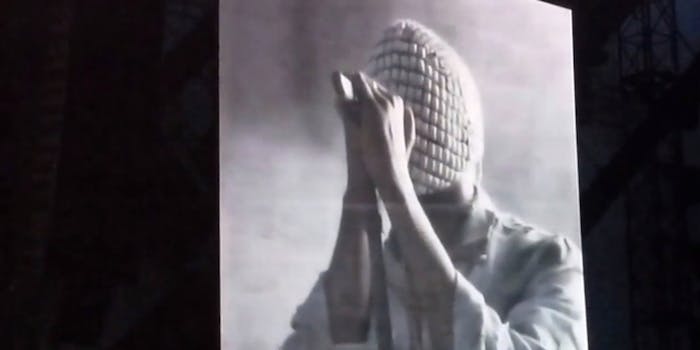 He led the audience on a 15-minute chase through the mind of Kanye West, touching on fame, celebrity, Spike Jonze, Gucci, dreams, Pharrell, creativity, and Nikes.

Of July 4, Kanye West performed at London’s Wireless Festival, and before performing “Runaway,” he led the audience on a 15-minute chase through the mind of Kanye West, touching on fame, celebrity, Spike Jonze, Gucci, dreams, Pharrell, creativity, and Nikes. You know, a typical Kanye West intro.

Even more impressive and/or infuriating: Large portions of the speech were performed with Auto-Tune, and not everyone was as into it as Kanye. The dedicated souls at Vulture transcribed the entire speech. An excerpt:

“But if you’re a creative and you want to create, and you just want to create more, this is exactly what I’ve been fighting for. So if you hear me talking about Louis Vuitton or the Gucci Group or anything like that. I’m not dissing Louis Vuitton, I’m not dissing the Gucci Group and shit. I’m just saying, don’t discriminate against me, because I’m a black man or because I’m a celebrity, and tell me that I can create, but not feel. Cuz you know damn well there aren’t no black guys or celebrities making no Louis Vuitton nothing. They let Pharrell make those glasses, and we liked them, right? They let me make those shoes, and we liked them right?”

Right, right. West also performed in a mask, which led him to comment on why he’s not afraid of wearing a mask or “saving face,” because he’s a man of his word, and just wants to “make something awesome”:

“And I’m telling you right now as I stand on this stage, all this shit that you heard me talking about, I’m gonna come and back all that shit up. You don’t know how hard it was to get the Nikes, that wasn’t my fault. They try to control y’all and try to control me. And when I was in my negotiations, they told me, “We don’t negotiate with celebrities.” That’s like a terrorist. They talk to you like it’s fucking terrorist.”