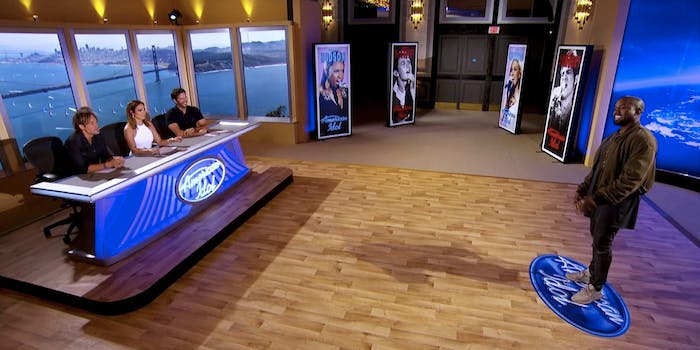 You need to watch Kanye West audition for ‘American Idol’

A producer from Chicago with aspirations of rapping gets his golden ticket to Hollywood.

To kick off American Idol‘s final season, Kanye West showed up for a surprise audition at the show’s San Francisco stop.

The move is a classic case of cross-promotion (Ryan Seacrest, Idol’s host, is the producer for Keeping Up With the Kardashians), and West seemed exuberant at making his case as a producer from the south side of Chicago with a dream. His pregnant wife, Kim Kardashian, waits outside with Ryan Seacrest, saying that she believes in him.

West raps an original track featuring one of the judges’ names, to which J.Lo replies, “it fucking better be me.” It is, in fact, the Grammy-nominated “Gold Digger,” which necessitates four bleeps for his audition to air, plus one for Jennifer Lopez’s outburst.

With 21 Grammy awards to his name, he doesn’t have much to be nervous about in earning his golden ticket to Hollywood, but West celebrates all the same.