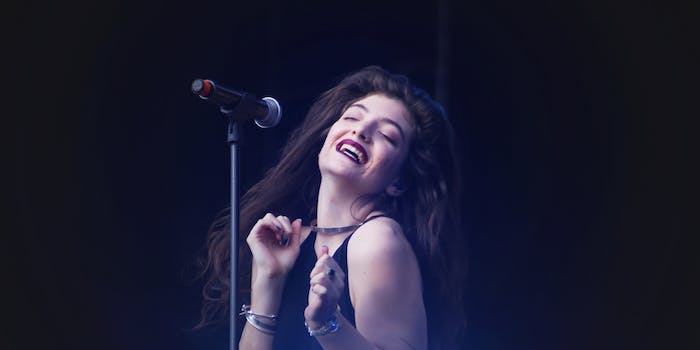 The San Francisco Giants sparked an absurd pop radio beef when two Bay Area radio stations—KFOG and KOIT—banned Lorde’s “Royals” during the World Series as a sign of baseball solidarity last week. Kansas City, Mo.’s KZPT is retaliating by playing “Royals” every hour from 7am to 7 pm CT Tuesday, just as the Giants and Royals are set to begin Game 1.

Lorde has said that seeing an old photo of Kansas City Royals legend George Brett inspired her when working on the Grammy-winning single. There’s something to avoiding the 2013 track, I suppose. But in the spirit of consistency, both cities should really expand their respective blacklists.

Most obvious for San Francisco residents is “Kansas City.” Which sucks for them—The Beatles’s cover of “Kansas City” from 1964’s Beatles For Sale is one of the most righteously enduring black music heists in pop history. Little Willie Littlefield took the Leiber and Stoller song to No. 1 in 1952. Wilbert Harrison did the same seven years later, and since then it’s one of the most covered blues tracks, with versions floating out there from: Muddy Waters, Fats Domino, Dion & The Belmonts, Wanda Jackson, Willie Nelson, Albert King, James Brown, and many more.

I’ve made two, 12-song playlists for each city as a public service. These are songs to avoid, that are specifically about the rival World Series city, or that recall the team itself. We have ruled out artists and bands from those cities for eligibility here. Panda Bear’s “Comfy In Nautica” made the Kansas City mix because Giants third baseman Pablo Sandoval looks like a panda and that’s a rallying point for his team’s fans; and because the song is from 2007’s Person Pitch, which is kind of eerie because this is a baseball-inspired project. Let’s get it.

San Francisco’s Do Not Playlist

Kansas City’s Do Not Playlist

Here’s to a clean series and cleaner living.

Photo via Casimaria/Flickr (CC BY 2.0)