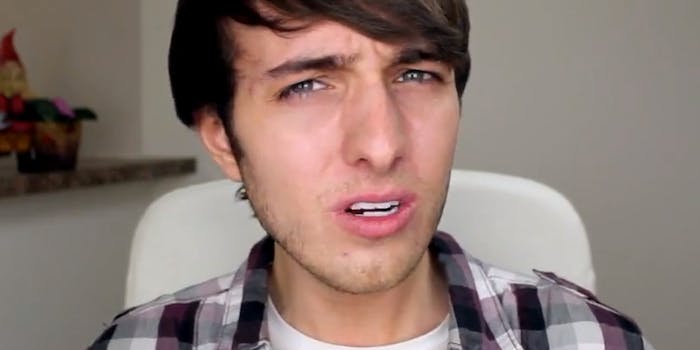 The 23-year-old YouTube star unlocks the secret to his success. Hint: It involves Twilight, One Direction, and Justin Bieber.

Who says that nobody understands the psyche of the American teenage fangirl? Kaleb Nation gets each and every one. The Texas native has been speaking their language since he first logged on to YouTube in 2007.

“You just have to understand what they’re into,” Nation explained to the Daily Dot from his current home in Los Angeles.

“That’s a lot of it. You have to do things like listen to One Direction and watch Twilight and follow Justin Bieber. You have to understand their world and what their attention is focused on. You can’t dismiss it because they’re 13 or 17. A lot of people dismiss them, but it’s important to them.”

If you have any semblance of an extended family, it’s likely that you know you fangirls. They were the first to send you the “Call Me Maybe” video. They’re the ones who keep their eyes firmly fixated on the computer screen during every major family gathering. They’ve read all the books in the Hunger Games trilogy. They love the Bieber, and they hate that you might hate the Bieber.

Kaleb Nation is not anything close the Bieb to these girls, but he might carry more influence than their mothers. The 23-year-old YouTube star, who first rose to fangirl prominence as the TwilightGuy when he was 19, holds a daily presence in the hectic, über-busy lives of more than 65,000 YouTube subscribers. He steps onto their screens every afternoon to voice his opinion on Ashley Greene, Katy Perry, or that new Taylor Swift song that might be about her breakup with John Mayer.

“You can always poke fun at the videos, but you can never make fun of the fans. The fans understand when they’re nuts. They understand that they’re crazy, and you have to join in their nuttiness. A lot of people dislike Twilight, but a lot of people also enjoy it. Their craziness is done for something that they absolutely love. They love being crazy.”

Nation does his best to follow suit. He’s invested himself in Lindsay Lohan’s car crash, rumors about Selena Gomez’s role in the 50 Shades of Grey movie, and the Drake v. Chris Brown fallout. He said that he was furious last week when news broke that a girl in Los Angeles had snuck into One Direction’s hotel and hooked up with heartthrob Harry Styles. “I was like, ‘How dare you?'” he said. “‘How dare you go after One Direction and start bragging about this on Twitter?'”

It’s that level of sincerity that’s helped Nation mature from your everyday celebrity news commentator to a trusted pundit who’s able to treat his 60SR show as a full-time gig.

In May, Nation announced that 60SR—short for “60 Second Recap”—was getting picked up by the digital media company PMC and that the show would become the primary focus of his professional life. Rather than producing episodes when he could fit them into his schedule, Nation’s attention turned wholly toward the show.

These days, he spends five hours every day producing 60-90 seconds of high-octane, teen-ready content for the show.

“I have to work harder to make sure that my stories are accurate and that I’m not posting something that’s just a rumor. And by putting PMC’s name on the show, I’ve been able to get into all these major Hollywood events. They give me access to real life, and any Hollywood event that I would want to get into, they can help me get access.”

Chances are it won’t be long before he’s able to get into those A-list events on his own. In October, Nation announced that he and production house Kerry Kimmel & Pollack had reached an agreement to launch Kaleb’s Nation, a reality-style television show that will follow document his life and give fans a behind-the-scenes look at one of their favorite YouTube personalities. Though it still doesn’t have a premiere date, the show will mark the first time that a personality has parlayed his or her presence on YouTube into a mainstream television show.

It’s an endeavor he’s not able to talk about—”I’ve already gotten yelled at for saying too much,” he said—but Nation was quick to point out that the transition to TV doesn’t mean that he’s abandoning his roots.

“There would never be a reason for me to leave YouTube,” he said. “That’s my best connection with my fan base, and it’s where I started. Even if I started doing more and more TV stuff than now, YouTube’s something that I could never do without.”