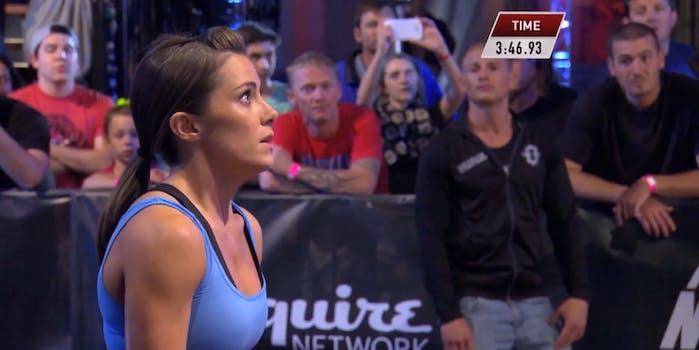 Watch the first woman make it to Mt. Midoriyama on ‘American Ninja Warrior’

She made it look easy.

Kacy Catanzaro stands at five feet and weighs just 100 pounds, but she did something no woman was able to do on American Ninja Warrior until now. She made it to Mt. Midoriyama.

On American Ninja Warrior, there’s no separate course for men and women. To qualify for the finals at Mt. Midoriyama in Las Vegas, they need to complete a number of obstacle courses in the first round to make it to the qualifier finals and then complete another course to get to Mt. Midoriyama. It’s almost impossible for many parkour experts, gymnasts, and even some Olympic athletes.

Catanzaro already made history earlier in the season by becoming the first woman to complete an American Ninja Warrior course; two more qualified in other cities. With the crowd at Dallas cheering and her boyfriend and trainer, who failed to qualify this year, on the sidelines, she not only made it through the course, she made it look easy.

If she can do that, you can go out running today.