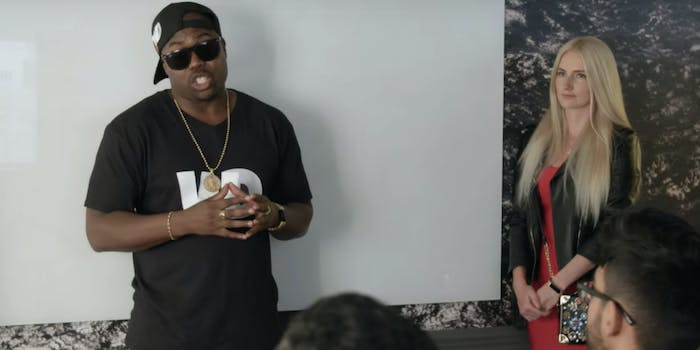 “Dating coach” Justin Wayne boasts on his YouTube channel that he’ll teach you “how to attract and seduce women,” but many of his videos cross a line into exploitation, according to a report from Vice News.

As of Tuesday, Wayne’s channel, which has more than 128,000 followers, only has one video on it, posted March 21. In it, Wayne looks back on his past content and claims he’s moving on from the channel, but Vice’s report shows a pattern of ethical lines being crossed and consent being ignored, in videos that remained on YouTube long enough to net millions of views.

In past videos, Wayne would often film his encounters with women, and that often included sex, though it’s not clear the women knew they were being filmed. Wayne’s techniques also place emphasis on manipulating women into saying yes. In Vice’s report from Miami Beach, where Wayne runs boot camps, he can be heard arguing with his alleged girlfriend, Kelly, who claims he threatened her life. She also says she has a tattoo of his name—Wayne claims eight women have the tattoo—but refused to be interviewed alone.

Wayne gets flustered when asked whether these women know they’re being filmed, or are being paid to be there.

Asked if Wayne’s videos violated YouTube’s terms of service, the company claimed it offers a “privacy complaint process” for those who feel videos or comments violate their privacy. In his March 21 video, Wayne claims he’s “pretty much done” with the channel.