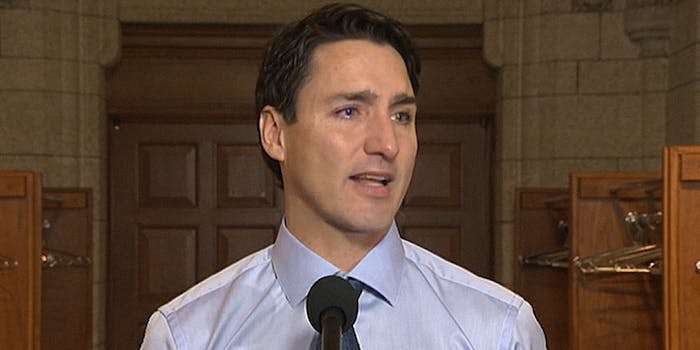 'We lost one of the very best of us this morning.'

Canadian Prime Minister Justin Trudeau delivered a teary press conference on Wednesday morning. He knew the death of Tragically Hip frontman Gord Downie was coming, as the singer-songwriter and beloved national folk hero battled terminal brain cancer for the last year, but he was nonetheless crushed.

“We lost one of the very best of us this morning,” Trudeau told reporters gathered outside Parliament Hill. “Gord was my friend, but Gord was everyone’s friend.”

Trudeau said that the 53-year-old singer was a patriot who loved exploring the corners and stories of Canada. That he wanted to make Canada better, and that “we needed to be better than we are.”

And as the tears got the better of him, Trudeau was clear: “We are less as a country without Gord Downie.”

Downie passed away Tuesday night alongside his family, the band wrote on its website:

“Gord knew this day was coming – his response was to spend this precious time as he always had – making music, making memories and expressing deep gratitude to his family and friends for a life well lived, often sealing it with a kiss… on the lips.

“Gord said he had lived many lives. As a musician, he lived “the life” for over 30 years, lucky to do most of it with his high school buddies. At home, he worked just as tirelessly at being a good father, son, brother, husband and friend. No one worked harder on every part of their life than Gord. No one.”