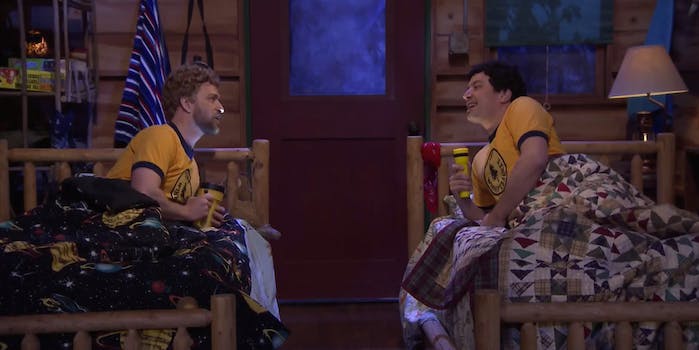 Nothing can stop them from singing their hearts out to the '90s tune.

It’s always a special occasion when Jimmy Fallon and Justin Timberlake get back together, whether it’s another rendition of “History of Rap” or, in this case, a look back at simpler times.

On Tuesday night’s episode of The Tonight Show, the “best friends forever” staged a semi-elaborate scene involving a flashback to a ’90s summer camp, where the two youngsters couldn’t sleep because they had a song in their heart. The solution, apparently, was to belt out Third Eye Blind’s “Jumper.”

Too bad they keep getting stopped before they get to the good part. Still, there are a few dick jokes and a botched weed whacking comment that turns out to be funnier than the original punchline.