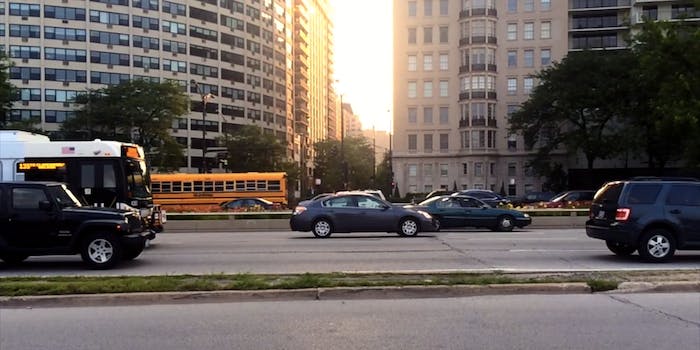 3-second clips capture the essence of everyday life in Chicago

Justin Harenchar's "How We Got Here" has been embraced by Chicagoans for its take on the city.

In a city like Chicago, it’s easy to ignore the mundane. The Midwestern metropolis of almost 3 million people boasts some of the highest murder rates in the country, and political scandals and conflicts of interest are nothing new for the nation’s third-largest city.

However, one Chicago-based filmmaker has chosen to ignore the criminal and the scandalous, and instead celebrate everyday life in the Windy City.

Justin Harenchar, 24, is two-thirds of the way through his year-long film project “How We Got Here.” The project collects three-second clips of different people and places around Chicago, and compiles them into monthly cinematic videos that showcase just how special day-to-day life can be, especially in a big city.

“I take the train 25 minutes in and 25 minutes back. That’s 50 minutes of people I’ve never seen before doing what it is they’re doing with their lives,” Harenchar told the Daily Dot. “It’s just the variants of that many people in that many places. I mean, you could do this for years and find places you don’t know or you’ve never seen in the city.”

Harenchar, who works for Optimus in video post-production, moved to Chicago from a small suburb outside Pittsburgh, Penn., last September. He spent a few months exploring the city, either by himself or with friends, but it wasn’t until his treasured iPhone broke around Christmas that he decided to take things to the next level with the video project.

“I got the new iPhone three days before the New Year. I played with the camera and saw what it could do,” Harenchar said. “The idea just started as ‘I’m going to shoot something every day and have this film and see what I could do with it’ … There’s enough interesting stuff that happens in Chicago on a day-to-day basis.”

Harenchar studied video production at the University of Dayton and works regularly with high-end video and editing equipment, but he said he chose to use his iPhone for the project because of its ease and accessibility. He said it’s not about creating something that’s going to make cinematic history; it’s about making something real that other people can relate to.

“When I started it, I wanted it to be the average life of a 23- or 24-year-old, and the average 23- or 24-year-old doesn’t get to use a multi-thousand-dollar camera,” Harenchar said. “My thought was a person with a zero-dollar budget spending no money on their project should be able to make something that people like, and attach to and take notice of.”

Harenchar said some of his favorite clips are the ones that are more personal for him. In the June video, he filmed some guys playing “Chicago street pick-up basketball,” which was a favorite sport of his growing up. In fact, his first experience with filming involved attaching the family video camera to a basketball hoop and shooting dunks. Since then, he said filming and editing has become one of his favorite ways to express himself, both personally and professionally.

“I’m a person that likes being very expressive, but not in the sense of being this tremendously outgoing person,” Harenchar said. “I think it’s a mix of wanting to be able to express myself in the best way I know possible, and always being a media junkie from day one.”

While Harenchar said a project like this could theoretically be done from anywhere, he said there’s something “unique” about Chicago that makes it really shine. He said one of his favorite parts about the project is about how some Chicagoans have responded to it, especially because he’s still somewhat of a newcomer to the Windy City.

“I’ve had contact from people that have lived in Chicago for their whole lives … and I got these messages that say, ‘You’ve captured this city perfectly,’” Harenchar said. “It’s very confidence-boosting to have an aura of a city without being there for that long, and having the people from here like it is what means the most to me.”

Once the project is done at the end of the year, Harenchar said he wants to compile his footage into one long video, probably around 12 to 15 minutes. He said he would likely have to change the hard three-second-clip rule, so it doesn’t get boring. Afterward, he’s thinking of submitting it to some local film festivals. But more importantly, he’ll have something he can share with his family and friends—all about his everyday life in the city of Chicago.

“On a selfish level, I think it’s cool that 20 years from now … I’ll be able to have my kids and family, and show it to them and say ‘This was a year of my life,’” Harenchar said. “Not many people are able to do that.”