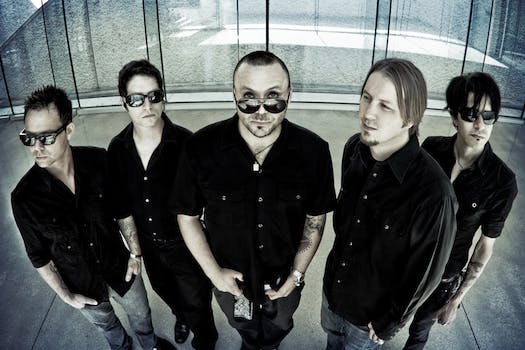 Any Man in America: Publicity stunt or meaningful social network?

In correlation with the release of a new album, Any Man in America, the platinum-selling band Blue October launched a social forum of the same name.

In the opening sequence of Blue October’s video for “The Feel Again (Stay),” frontman Justin Furstenfeld stares bleakly into the camera, holding up a torn sheet of paper.

“It’s not all your fault,” the note reads.

The message, the song, and most of the band’s accompanying new album, Any Man in America, are directed to his young daughter Blue, whose initials are tattooed on Furstenfeld’s neck. In the fallout from his divorce, the singer, who has been diagnosed with bipolar disorder, lost his visitation rights.

“When I started working again and trying to get back on top of the water so that I could breathe again,” said Furstenfeld, referring to his 2009 nervous breakdown that forced the cancellation of Pick Up the Phone Tour that year, “I just felt like was getting pulled back down, mainly by decisions that were being made by lawyers and the legal system of Lincoln, Nebraska – keeping me away from my daughter.

“A lot of people started thinking I was losing my mind,” Furstenfeld continued, his voice so hoarse that it repeatedly sounds as if he’s choking up. “When in actuality, if you’re a father and you’re not able to see your daughter, it’s very easy to lose your mind.”

Yet, Furstenfeld’s turbulent bloodletting has always been the lynchpin to Blue October’s success. His largely autobiographical songs have tackled suicide (“Into the Ocean”) sexual abuse in the church (“Razorblade”), drug addiction (“Hate Me”), and soul-searching (pretty much everything else). The band’s 2006 breakthrough, Foiled, sold more than 1.2 million copies.

“Justin can sing﻿ one word and you feel a thousand emotions. This man is amazing,” wrote that1hansonfan on YouTube.

That sense of connectivity, along with the overwhelming response to the “The Feel Again (Stay)” video –  nearly 300,000 times and 1,369 comments at last count – led to the creation of AnyManinAmerica.com, a social network and support group for people that are struggling with divorce. Launched late last month in collaboration with American Coalition for Fathers and Children, not to mention Hopeline and Pick Up the Phone, the platform encourages users to share their own photos, stories, and struggles.

Furstenfeld knows first-hand how difficult that process can be.

“I knew that I could reach out to my band at any time, but it was going on for so long that I didn’t know how to say, ‘Hey, can you still talk to me about this?’” Furstenfeld explained. “My main support system that I had was my music and my therapy. I wanted to give that back. It’s not about me. It’s not about the band.”

Given its shared title with the album, the site could be viewed as a mere promotional vehicle. The aforementioned video is embedded on the home page, and Furstenfeld concludes his introductory vlog with a plug for the new release.

That doesn’t mean, however, that people aren’t forging meaningful connections. Thus far the users have been active and engaged, with more than 200 posts filed. Kate Pruiett’s account of her success with split custody and no child support on either side has received 109 likes and generated several supportive responses.

“I totally agree with you on not taking child support as long as the father in the other side is willing to put in his share as a parent,” commented Monica Castaneda. “Lots of RESPECT for both of you as parents.”

It’s that sort of communal interaction that Furstenfeld hopes to foster, and what he believes sets the site apart from Facebook.

“Facebook is a piece of shit,” fumed Furstenfeld, the subject of five different Facebook accounts, none of which are actually him. “They don’t hold themselves accountable. They thrive off of drama, off of people making up names so that they can manipulate and bully you. You know how many suicides happen because of Facebook alone? You know how many kids in high schools have been bullied and brutally torn down because of some John Doe? …

Of course, Any Man in America does directly connect to Facebook, but the site monitors the content. For example, all photos most be approved before being posted. The objective, Furstenfeld said, is simply to create a safe place for open dialogue.

“People can actually reach out,” Furstenfeld concluded. “Your message is right there. It’s a positive, reassuring thing. We’re trying to get families communicating.”