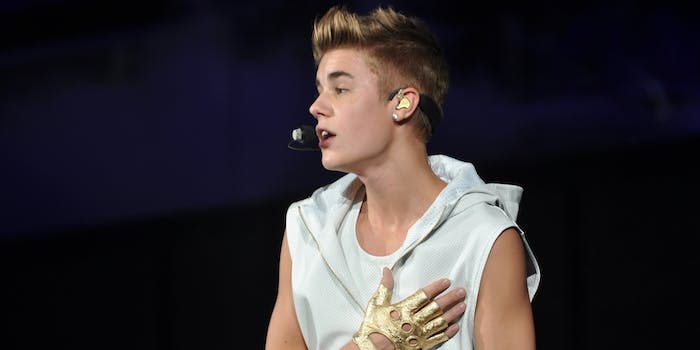 No, Justin Bieber and Big Sean are not beefing over Ariana Grande

The social media beef that never was.

Petulant pop star Justin Bieber has been known to get overly familiar with fans during meet and greets, but never with his fellow performers. Yet on Wednesday night, all that changed.

When the 21-year-old took the stage to accompany Ariana Grande during her concert at the Forum in Los Angeles, he got a little handsy. During a duet of the Bieb’s 2012 hit “As Long As You Love Me,” the performer decided to go for a grope by pulling Grande into his arms. The singer quickly eschewed his playful advances leaving him with only a salty look.

On Thursday morning, the tabloid that started the beef squashed it by shining some light on the flurry of supposed tweets. After a rep for the rapper reached out to clarify that none of the tweets about the incident were valid the site printed a retraction.”We’re told Justin and Sean are good friends… and that he and Ariana are just fine.”

People who think this tweet is real are idiots. “Beliebe that.” Are you serious? He isn’t Iggy Azalea. pic.twitter.com/QoWDn2hdxG

But what’s to be made of the tweet where he wishes he could be two places at once? “We’re told it had nothing to do with JB, and Sean just misses friends and family while on the road,” TMZ concluded. Sadly the clarification about the debacle came all too late and other sites had already started running with the news that Sean was out for Beiber’s blood.

There you have it, another social media scandal brought to you by Photoshop.