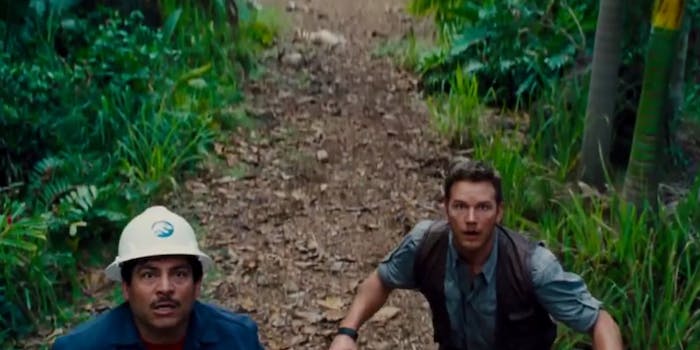 First, he’s staring in awe of a giant predator. 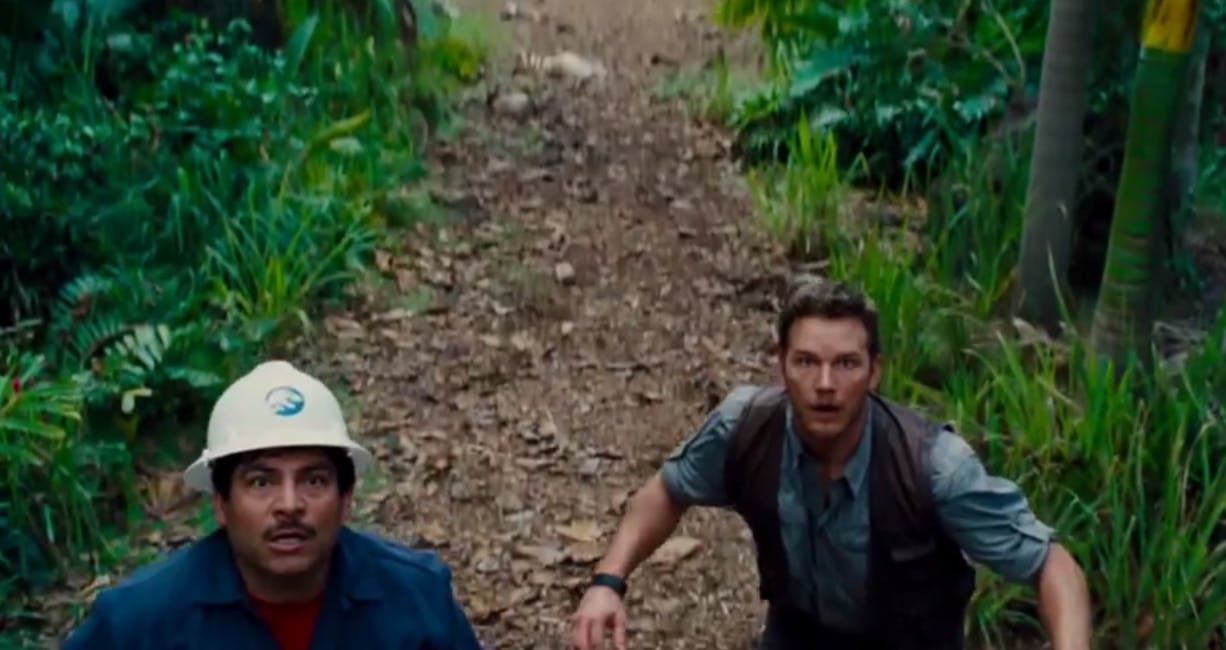 Then, he’s running for it. 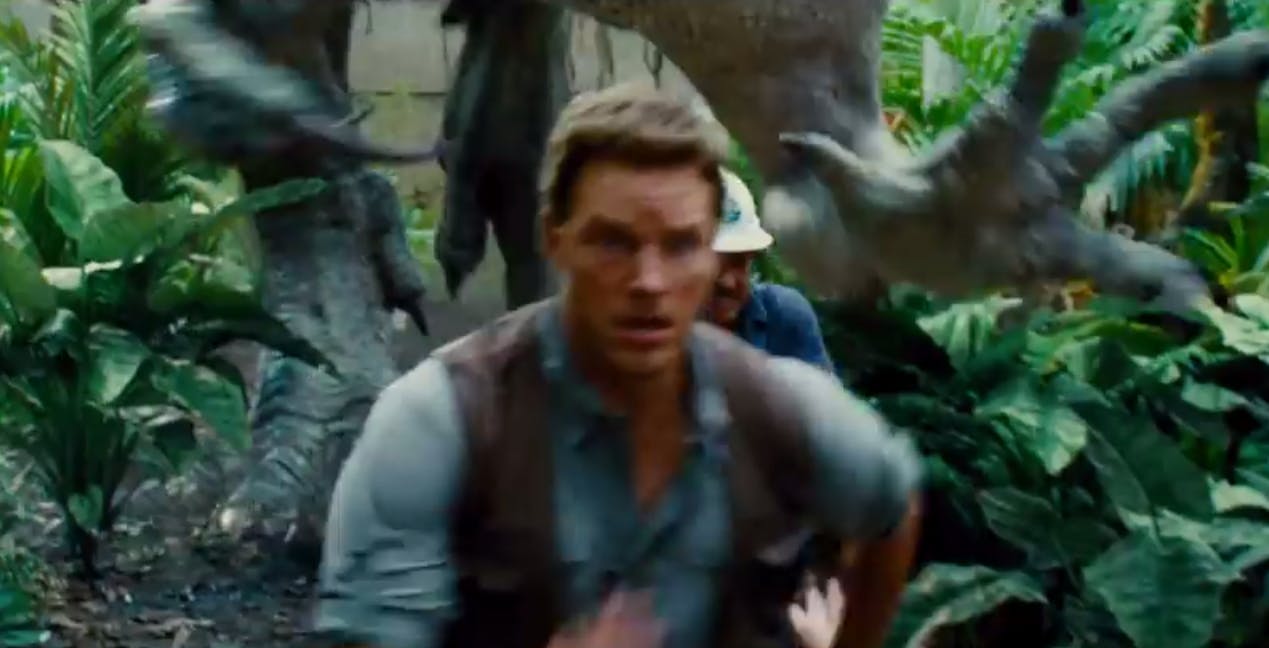 Finally, his expository life comes to an end.

“The T-rex was chasing us, and we did a lot of running. We did a whole day of running and then, you know, we had the weekend off, come back on Monday shot some more running, and guess what? I pull a hamstring,” Fernandez says on the phone from his home in Los Angeles. “Anytime you’re doing a stunt—I don’t care what it is—sometimes it’s the easiest and stupidest things that you get hurt.”

Like one of the countless soldiers he’s portrayed in his 25-plus years as a sort of pinch-hitting Hollywood mercenary, he swooped into Jurassic World’s Hawaii set to play an action-advancing bit role. The film credits list him as “Paddock Worker.”

“I am the first villain that, you know, encounters the beast,” he says. “It was a great experience, the director’s great… Chris [Pratt] is a nice guy. It was a good vibe.”

He hasn’t seen a final cut, though he says the film is “90 percent done.” He says directing legend Ron Howard—father of Bryce Dallas—has seen it and was proud. He expects to get a call soon enough to see for himself. Fernandez actually made his World trailer debut on Super Bowl Sunday.

“They showed the trailer, and I was like ‘hey, there’s me’ and I didn’t even know,” he says. “So that was cool on Super Bowl day because I was getting a lot of phone calls and a lot of texts.”

He’s been a soldier, or a villain, in bundles of action and war movies—though the longtime stuntman is carving his way into more fleshed-out acting roles. He’s a five-time nominee and two-time winner at the Taurus World Stunt awards (one from the latest Rambo, one from The Expendables). Per his site’s bio, Fernandez has expertise in “stunt driving, high work, fight choreography, wire work, and fire work” and he’s used that skill set across 300 film and TV appearances.

Fernandez is a first-generation Chicagoan, with parents from Mexico City—he has an affable, pensive demeanor and a disarming Midwestern accent. He’s one of those guys that refers to movies as “shows.” (“Oh I’m sorry, not for that show,” he says upon confusing professional field work.)

On film, Fernandez has been killed dozens of times—often several times in one sitting.

“I did Windtalkers with Nicolas Cage, and then I did We Were Soldiers with Mel Gibson… I must have died at least 18 times,” Fernandez says, describing the on-set process. “‘Eddie, change your wardrobe, change your hat, we’re going to shave your beard.’”

In the ’80s, Fernandez was a professional kickboxer. (“I don’t tell anybody that because I haven’t trained since.”) He says the stunt thing was something that “fell on my lap,” and that the experience of working with Blaxploitation legend and former Kansas City Chiefs star Fred Williamson gave him “the bug.”

These days, however, he’s jostling for more substantive screen time.

“I’m trying to be the action actor—be that Jason Statham, be that Sylvester Stallone… who can act and also perform so we don’t have to get a double in. So the director can get the shot they want,” Fernandez says. “I’ve doubled many actors before, and I love it, but I also like to be in front of camera so, you know, that’s my goal.”

Last summer’s 22 Jump Street was a career turning point. The script called for someone who could basically drive a semi and be easily disposed of. But as the “Mexican Wolverine,” he strong-armed a role that, he says, is in talks to return for 23 Jump Street.

“In the script I died. He kills me. And I was talking to the director, and I said ‘you don’t want to kill me, you want me in the next part’ and he goes ‘you know what, Eddie? Let’s just shoot you and get a shot, and we’ll decide’ and sure enough in the film I never die.”

It’s an important victory—jettisoning from faceless action reel extra to a commodity. It’s an illustrative lesson in the proverbial notion that no one else is going to toot your own horn.

But I ask if it bothers Fernandez that he’s such a decorative appetizer in Jurassic World that the trailer shows him being eaten.

“Everything I do in that expendable area, you know, I make sure that I do 150 percent because I want to make sure that even though it’s a small clip and that I die—it’s a helluva death scene.”

Still, he says that a big goal for him is to “be one of those Hispanics who can represent.” In other words, portray Latino characters as human beings and with fervent dedication to the tiniest of bit roles. He cites friendships with Hollywood Latinos like Danny Trejo and George Lopez, and explains that part of their fraternal bond is making a point to help each other, and new voices, out.

I mention that the trailer bothered me because, despite being set in Costa Rica, it appears to punt on fleshing out Latino characters in favor of reveling in a procedural buffet of brown men being killed by dinosaurs in crowd-pleasing fashion. Fernandez, again, hasn’t seen the final movie—all he can do about it is continue to kick ass.

“I did it all,” Fernandez says. “I don’t care what it is. It could be one word, it could be one fight scene, it could be just one look—that’s how I’m trying to build a career so one day there’ll be a big spot for me.”