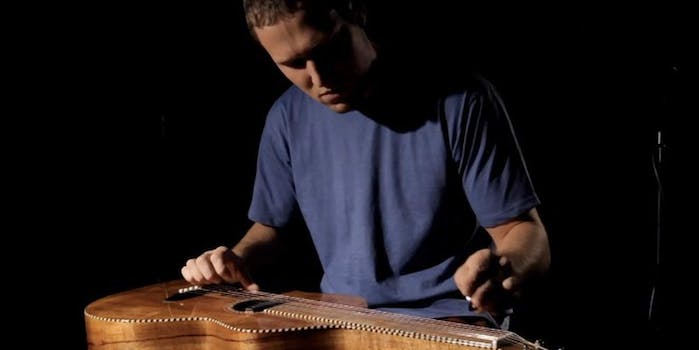 This “Jurassic Park” theme cover will make your heart sing

This is the best Weissenborn cover of John Williams' Jurassic Park score you will hear today.

John Williams’ classic Jurassic Park soundtrack is instantly recognizable to anyone who’s seen the movie or been to Universal Studios. And it’s downright beautiful.

Now the theme, played by New Zealander Thomas Oliver on a German slide guitar called the Weissenborn, will make you cry a thousand tears. If you feel like your day is a little boring, press play and get ready to feel like whatever you’re doing is incredibly important (especially toward the end of the fourth minute).

Oliver is the lead singer of The Thomas Oliver Band who, according to their website, “have taken modern rock by the collar and shaken the soul back into it.” If forced to recast Jurassic Park based on Oliver’s twang-infused, soul-shaken theme, I think Jeff Bridges would play a great Dr. Grant, Andie MacDowell would play Dr. Sattler, and Jeff Goldblum would still play Dr. Malcolm—because you can’t have Jurassic Park without Jeff Goldblum.

For more Weissenborn covers, Thomas Oliver also plays a song called Dear Fishy and a cover of Cocaine Blues. For more Jurassic Park theme covers, you always have this and obviously this.