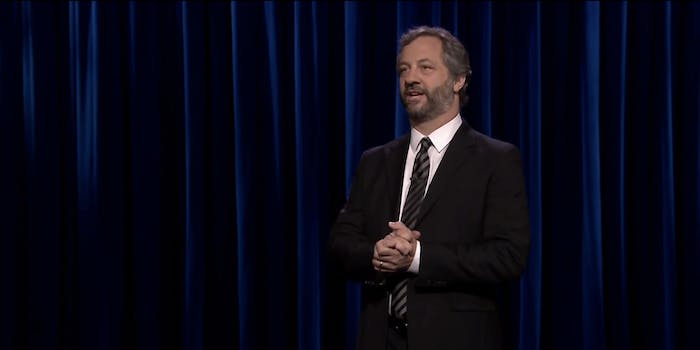 But that's not what made people gasp.

Director Judd Apatow, already one of Bill Cosby’s harshest critics, took his crusade against the disgraced comedian to the place it would hurt the most: the stage.

Prior to talking to Jimmy Fallon on The Tonight Show, Apatow spent a few minutes performing a stand-up routine. He made fun of himself and his family, a comedian’s usual targets, but then he set his sights on knocking Cosby down a notch.

Cosby is facing more than three dozen allegations of sexual assault and rape, and with Apatow saying he knows a victim who won’t come forward, there’s clearly a lot more about which the public doesn’t know. Given that, Apatow wondered aloud what Cosby’s standup set now included—because it could get very awkward if he started making jokes about getting in trouble with his wife Camille.

Apatow brought it to another level when he imagined a conversation between Cosby and his wife about the rape allegations.