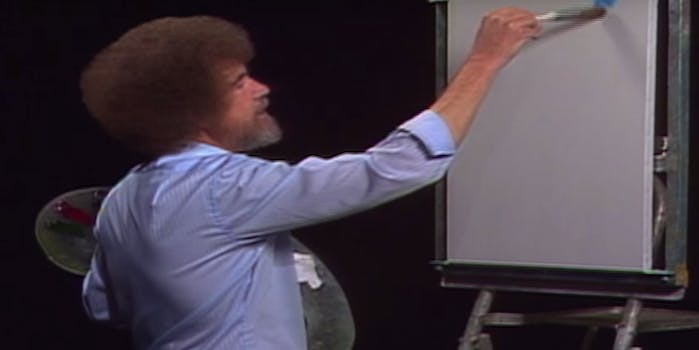 Fall into the soothing, nostalgic rabbit hole of ‘The Joy of Painting’

Be the happy little tree you want to see in the world.

It seems a bit absurd now, but there was once a show where you could watch a man paint for 30 minutes.

The show’s full first season, which debuted in 1983, has just been uploaded to the official Bob Ross YouTube channel, which means all 13 episodes are available for your viewing pleasure. The goal of the show was to get amateur artists to paint along with Ross, as he goes from a blank canvas to a peaceful landscape. But 30 years later, the show can be viewed as a meditational aid. Watch in an altered state, and you might become the peaceful stream.

Here are the best lines from the first few episodes.

Best line: “You start with a vision in your heart and you put it on canvas.”

Best line: “I used to work with one art teacher, and he had a set of handcuffs that hung above the studio, and he’d bump you and he’d point at those handcuffs. And that was his way of saying, ‘You’re beginning to fiddle it to death.” (This one got a little weird.)

Best line: “This is your world, so you can put as many trees in it as you want.”