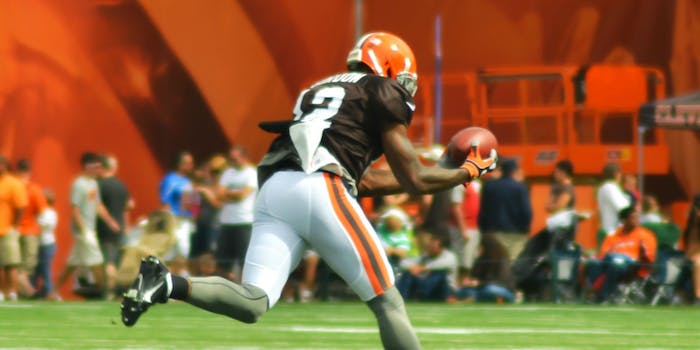 Folk hero Josh Gordon is here to save the NFL

Or at least, your fantasy football season.

How many weeks has it been? Has it been months? Is today a weekday? What is today?

Sunday marks a historic moment for the 2014 fantasy football season. In an NFL campaign mired with idiotic commissioners and terrible people, one man’s months-long suspension for one positive weed test (out of roughly 180 “harassing” tests since 2012) is finally lifted. Folk hero Josh Gordon returns to the Cleveland Browns as his surprisingly competitive team takes its talents to the Atlanta Falcons.

Good thing too, because Gordon appeared to be battling suspension-induced cabin fever.

It’s a great day for the NFL, but an even better one for fantasy football.

In 2013, Hash Gordon was the No. 1 overall wide receiver in fantasy. His superhuman statistics led the pack despite playing two less games (because, well, another marijuana-related suspension). Don’t you dare suggest waiting to start him on your fantasy team.

You know what George S. Patton did when they told him to wait? He went and killed Hitler with his bare hands. It sends me into an Alzado-rage at the mere suggestion to sit this beast—this Father of Scylla, this slayer of Medusa, this offspring so heinously over-talented it’s likely Roger Goodell simply suspended him because he was giving the Cleveland Browns an unfair advantage.

The last time this Loch Ness surfaced he was somewhat quiet with seven catches for 82 yards in the final game of 2013. But do you remember the back-to-back weeks that he Vesuvius’d all over his opponents for 14-237-1 and 10-261-2? Jesus H.L. Mencken the guy makes plays that would make Shakespeare blush. Somewhere in a dark room Jerry Rice is sitting alone and watching replays of it while he bawls his eyes out. Joe Montana won’t even take Rice’s calls anymore. It’s not a coincidence that Godzilla and Grendel both start with “Gs.” This guy makes me question my love for Dez Bryant.

Gordon has changed the world. When Putin has to decide between borscht and beef stroganoff, he calls Gordon. And Gordon tells him to eat hash cookies. And Putin does it. Then Putin invades Ukraine and eats them out of fucking borscht.

What I’m saying is Gordon causes wars. Then he ends them.

If this feels like sensationalism, you’re reading it wrong. This guy is literally the closest thing to a god we have. He stole fire from the fantasy football gods and brought it to us. Percy Bysshe Shelley’s original poem was entitled Gordon Unbound.

To suffer woes which Hope thinks infinite;
To forgive Goodell’s wrongs that are darker than death or night;
To defy His Power, which seems omnipotent;
To love, and bear; to hope till Hope creates
From its own wreck the Touchdowns it contemplates;
Neither to stop smoking weed, nor falter, nor repent;
This, like thy glory, Gordon, is to be
Good, great and joyous, beautiful and free;
This is alone Life, Joy, Empire, and Victory for the Cleveland Browns.

With the words of opiate-riddled Shelley at your back, save a shred of fucking decency and do the right thing and start him in all formats. Even if he leaves behind quiet numbers, it’ll be worth it to watch him run around crazier than Cain after he slew Abel.

Somebody get me my hash bowl. I need to relax.