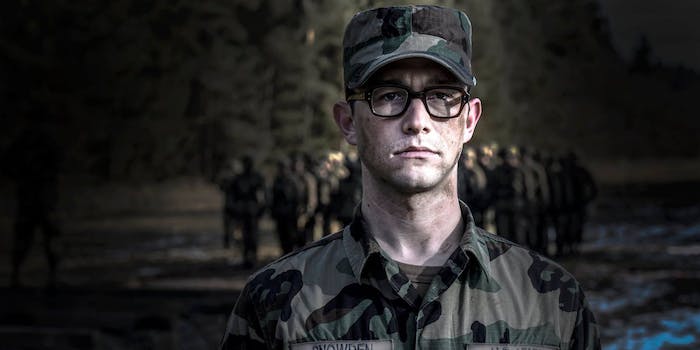 Joseph Gordon-Levitt posts first photos of himself as Edward Snowden

The similarities are... not really there at all.

Everyone wants to know what Joseph Gordon-Levitt will look like when he dons the trademark spectacles and whistleblower demeanor of former NSA contractor Edward Snowden. On Tuesday, Gordon-Levitt—who will play the titular role in the Oliver Stone biopic Snowden—shared a publicity still of himself in Army fatigues with the name tag “SNOWDEN.”

“I was surprised when I first learned this about Snowden–that he enlisted in the US Army in 2004,” Gordon-Levitt wrote on Facebook. “He wanted to go fight in Iraq, but during basic training at Fort Benning, he broke both of his legs and received an administrative discharge. After that, he was still determined to serve his country (love him or hate him, you gotta admit the guy’s strong-willed) and so he ended up getting a job at the CIA, which is where his career in Intelligence began.”

Gordon-Levitt added that the Army scenes “felt like a really good way to start this shoot. It was hard, but of course, nowhere near as hard as real basic training.”

The Snowden biopic, which will also star Shailene Woodley as Snowden’s girlfriend Lindsay Mills, is set for release on December 25, 2015.