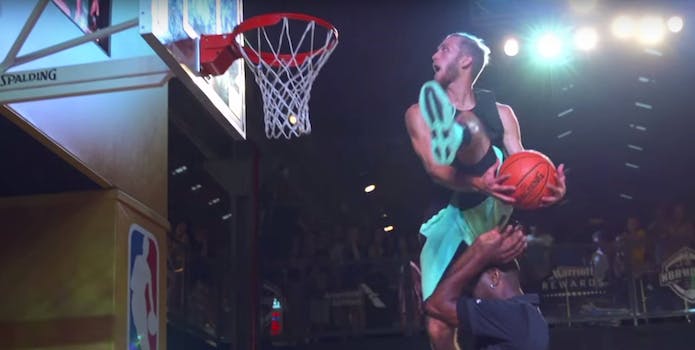 They call him 'the Dude Who Dunked in Jeans.' Here's why.

Jordan Kilganon doesn’t look like a professional dunker at first glance (and yes, that’s a real thing). He’s a 6 foot 1 white dude from Ontario, Canada, most often seen wearing pants—a look that’s earned him the unofficial nickname of “the Dude Who Dunked in Jeans.” He also happens to have an absolutely freakish 50-inch vertical.

But unless you’ve seen his viral videos on YouTube, or happened to catch his TV timeout dunk during the 2016 NBA All-Star Game, you’d have no idea who is or what he’s capable of. That’s what made this short-lived prank at NBA House especially stunning.

Kilganon was picked from the crowd to compete in a dunk competition at the pop-up hospitality venue set up for ticketless fans in Rio for the Olympics. Players may have been in on the prank, but boy did they sell it. The look on former NBA All-Star Gary Peyton’s face after each new head-turning dunk is priceless.

Forget every Woody Harrelson stereotype: This white man can jump, and he has the mixtapes to prove it.