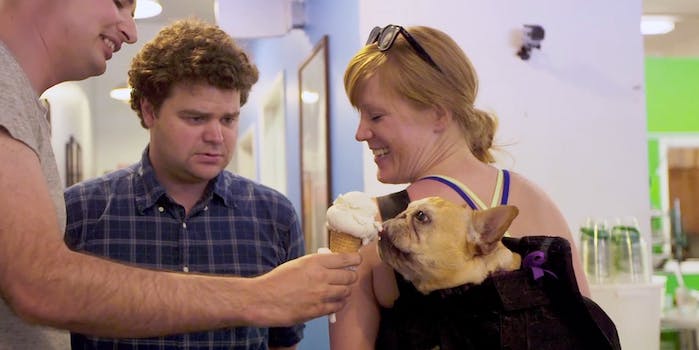 Podcasting stars use Kickstarter to give away 1,000 ice cream cones

The hosts of Jordan, Jesse, Go! flew to Denver to give away 1,000 free cones.

Two podcasters and more 600 people on the Internet just made someone’s day, one scoop at a time.

Jesse Thorn and Jordan Morris, the hosts of comedy podcast Jordan, Jesse, Go!, launched a Kickstarter campaign last month to give out 1,000 ice cream cones to complete strangers and document the experience.

They sought to raise $9,500, enough to cover airfare to Denver for Thorn, Morris, and director Benjamin Ahr Harrison, and pay for 1,000 cones at Sweet Action Ice Cream. Co-owner Sam Kopicko is a fan of the show.

The idea appeared to come out of the blue, but Thorn—the founder of podcast network Maximum Fun—has wanted to do something like this for ages.

“I had this idea to buy 1,000 ice cream cones for a really long time,” Thorn told the Denver Post. “I just really love the idea of walking down the sidewalk on a Saturday in August and seeing a sign that says, ‘Free ice cream.'”

In about 10 days, they raised all the money they needed, and on Aug. 3, they delivered.

The customers waiting in line might not have screamed for their ice cream, but they received it just the same—and one person decided to mark the occasion.

And each of them had a smile on top.