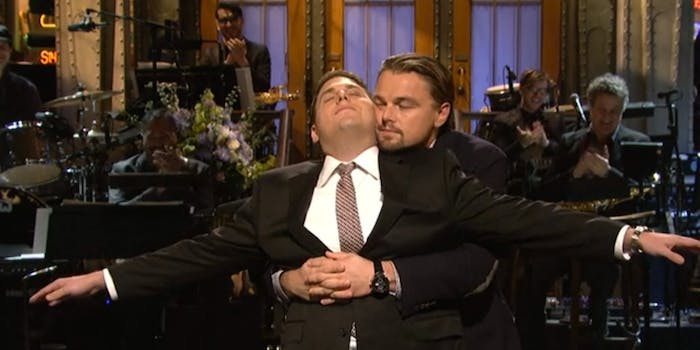 If you came of age in the 1990s, it’s likely you have an irrational and deep-seeded desire to stand on the bow of a doomed ship while wrapped snuggly in the arms of Leonardo DiCaprio.

It can’t be helped. Teenagers are impressionable and no matter how many times DiCaprio plays a corrupt banker or hot-tempered plantation owner, we’ll always want to turn to him and say, “Hold me, Jack.”

That’s perhaps why many hearts came aflutter last night during Jonah Hill’s opening monologue on Saturday Night Live. After Hill downplayed his “Wolf of Wall Street” co-star, DiCaprio himself sauntered out on stage to join the bit.

“You don’t have to pretend anymore. You’re a real actor now,” DiCaprio told Hill. “You should be humble, you should be gracious.”

Duly scolded, Hill asked, “Remember when we were on set and I would get really nervous? Could we do the thing we always did every day, the thing that made me feel safe?”